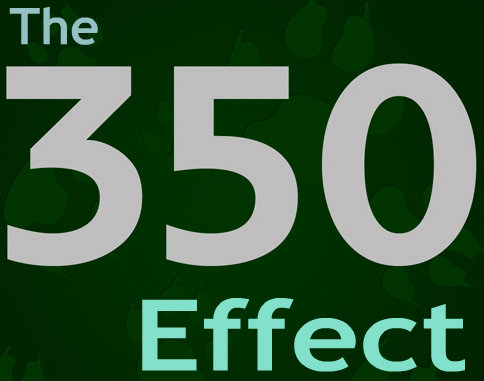 What is Three Hundred and Fifty? Do you understand it? Is it just a number? Obviously, you will say it’s a number. Well, it is not a just a number. This number has significance for me, you and living all the species living on this planet earth. The safe upper limit for carbon dioxide (CO2) in atmosphere is 350ppm (parts per million). Different organizations reported that now, we have a carbon ratio of 388ppm and it is very sad, every year, this ratio have increase by adding two parts per million that leads to dangerous level. “If carbon dioxide increases at this rate in future, a day is not so far when oxygen will be replaced by methane” , according to scientists. There will not only the problem of cancer but also other disease too while breathing the methane.
The method to measure the concentration of different gases is “parts per million (ppm)”. This number tells us about the ratio of the number of carbon dioxide molecules to all the molecules in the atmosphere.
Our activities have contributed a lot to raise the ratio of carbon. But which type of Activities contributed? Obviously, non-environmentally- friendly activities. Just take examples from daily life like using our own car to come to school, using generators, using gas and electric appliances etc requires energy source (gas & electricity) that are derived from natural energy resources coal , oil that not lead only to emission of carbon dioxide but also other trapping gases in to atmosphere also.
The increase of emissions of carbon dioxide in atmosphere can lead to devastating floods and drought at many places, global warming and acid rain. These can give threats to the existing species and human also. From many years, we have heard that glaciers are melting at an alarming rate. But don’t know what reason behind this is. The reason is only the higher emissions of carbon.
Our beloved country “Islamic Republic of Pakistan is also facing the problems due to environmental changes. Because of this , our eco systems are under threat now. It is also predicted that In future, our country will face more and more floods.
Reducing the carbon ratio is not a Herculean task, Just, We can make our activities environmental friendly that will reduce the emissions of carbon dioxide in to atmosphere. If we all get to work, we can once more make the planet “A safe planet”. Although, Pakistan is not included in top major polluting countries. However, International Panel on Climate Change (IPCC) Pakistan is included in those countries which are facing the devastating effects of climate change,
I know, all of us wish to continue living well on planet earth, then we need to reduce the ration of carbon dioxide in atmosphere. It’s time to join our hand together and protect the planet earth. I believe on that “Technology owes an apology to Ecology”