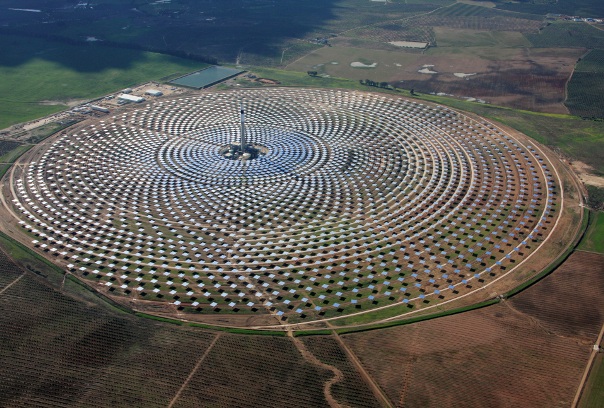 One of the greatest problems of large scale solar power facilities is that they do not produce electricity at night, and when they do produce power, it is constantly fluctuating with the sun’s strength. Under development in the deserts of Tonopah, Nevada is a new technology that will effectively store solar energy in the form of molten salt. When the sun goes down, thermal energy from the salt will be able to produce electricity for eight to ten hours.

The new facility, known as the Solar Reserve Crescent Dunes Solar Energy Plant, is expected to be operational by 2013. Rather than directly converting sunlight to electricity through photovoltaic panels, it will utilize solar thermal. A vast array of mirrors will direct concentrated sunlight to a single point to boil water which will then power a steam turbine. The boiling water will also be used to heat salt which has the capacity to store energy.

Another company, Bright Source, is planning to build three more similar facilities in California, expected to be operational in 2016 and 2017. The Solar Reserve plant will produce 110 megawatts at its peak and then store energy for the night. Combined with the three Bright Source plants, they can power tens of thousands of southwestern households through the summer evening, a time when air conditioners are most active.

The US Department of Energy is also taking notice. In September, it gave the company a loan guarantee of $737 million for its new Nevada facility. This is despite the recent controversy over the Energy Department’s $535 million loan guarantee to now bankrupt solar panel manufacturer, Solyndra. The difference is that the Nevada plant will actually produce energy, and Solyndra only produced goods that were presold by contract.

The technology is still very new, and it is unclear as to whether it will be widely adopted. That will most likely depend on the results of the initial Solar Reserve Plant. However, some very large companies are starting to invest in it, such as Google, Chevron, and Good Energies. Electric utilities have already signed up to deliver its power such as NV Energy and Southern California Edison, which are looking to expand their renewable energy portfolio.

The best thing going for the Solar Reserve plant is that it has the potential to solve a primary reason not to invest in solar, its unreliability and inability to produce power at night. According to Kevin B. Smith, chief executive of Solar Reserve, “As we move forward, we’ll get more and more traction with the fact we can provide more capacity.”