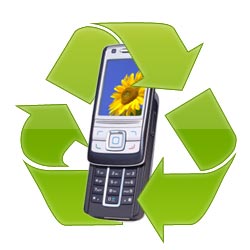 Cell phones are no longer a luxury for the teach savvy but a necessity in a world constantly pressed for time. We need and love them so much that we replace them with newer and better models more frequently.

“Every recycled cell phone makes a difference” said by Maria Vickers, acting director of EPA’s office of resources conservation and recovery. “The energy saved by the recycling of even one cell phone is enough to power a laptop for 44 hours”.

As of 2003 in the United States alone there are more than 500 million cell phones waiting to be recycled. These devices are still being kept or having already been introduced to the waste stream. This year another 130 million will be added and even more are projected to be added next year. The enormous number of cell phones and other mobile devices are presenting a growing concern for the environment. The US environmental protection agency has urged people to recycle their devices instead of merely adding them to the nation’s landfills.

The average Americans purchase new phone cell every 18 to 24 months. The US environmental protection agency says that Americans discard 100 to 125 million phones each year. This creates about 65,000 tons of trash each year making old cell phones the fastest growing type of manufactured trash in the nation.

Next to computers and monitors cell phones are becoming one of the leading sources of electronic trash. Electronic trash contains an enormous amount of toxic materials. These toxic materials are clogging up landfills and polluting air and ground water more and more every year.

Cell phones recycling results in a great reduction of the emission of green house gases. A big market for refurbished and reconditioned cell phones exists. If a cell phone is no longer usable all of its components are nearly 100% recyclable. At this moment only about 10% of all discarded cell phones are recycled each year.

This Article is Written by “Sajid Ali” Senior Author At Envirocivil.com

For feedback and suggestions please write to: sajedali2003@gmail.com.