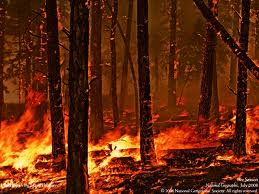 Forest areas are particularly susceptible to fires, which are mostly manmade although sometimes these could be the result of lighting strike during serve thunderstorms. Forest fires lead to heavy destruction of forest resources and disturb the wild life as well. Forest fires add to the deforestation process as it takes many years for the forest to grow again. In many cases, the forestland gets spoilt or taken over by vested interests for other activities.

The nature and amount of vegetation cover and other combustible material such as dead wood, dry leaves, determine the nature and extent of forest fires. High atmospheric temperatures, dryness (low humidity), the strength of the prevailing wind and the slope of the ground are important factors in the spread of forest fire.

The most common type of forest fire is a “surface fire”. It involves lighter material such as dry leaves lying on the ground, bushes and small hardwood trees. Surface fire is generally slow moving and flames can rise almost one to two meters high. As the surface fire intensifies by burning more material, heavier bushes and medium size trees starts burning and the flames may rise as high as five meters or more. On further intensification, forest fire flames may reach the top of even the tall trees creating “crown fire”. These crown fires, burning up to the heights of top of all trees, are the most dangerous forest fires. Many a times, burning trees explode due to intense heat. This is a sure indication that the forest fire is reaching the crowning stage, which involves extreme danger.

Large and intense forest fires can create strong air convection currents, which blow hot embers up in the air and carry them to long distances of even a kilometer or two. These embers can ignite new areas of forest fires or create fire in village areas adjacent to forests.

Three kinds of fires burn in forested areas when conditions of fuel and weather permit ignition and sustained combustion: surface fire, ground fires and crown fires. These types of fires are described below.

Surface fire burn the upper litter layer and small branches that lie on or near the ground.  Surface fires usually move rapidly through an area, and do not consume the entire organic layer. Moisture in the organic horizons often prevents ignition of the humus layer, and protects the soil and soil-inhabiting organisms from the heat. The heat pulse generated at the burning front of these fast-moving fires does not normally persist long enough to damage tissues underneath the thick bark of large trees. However, it will girdle the root collar of small trees and shrubs, and reduce small-diameter branches and other fine surface fuels.

Ground fires normally smolder or creep slowly through the litter and humus layers, consuming all or most of the organic cover, and exposing mineral soil or underlying rock. These fires usually only occur during periods of protracted drought when the entire soil organic layer may dry sufficiently, but they may burn for weeks or months until precipitation and low temperatures extinguish the fire, or they run out of fuel. Some of the effects of ground fires are deleterious. For example, they generally kill large and small trees because of the long and high temperature heat pulse generated. They release considerable amounts of nutrients from the burned fuels, destroy many small organisms and fungi that live in the humus and organic layers, consume seed stored in the litter, and kill roots in all but deep soil layers. They increase the chance of surface flow and erosion on slopes, and leave a baked and hardened seedbed that may prevent rapid revegetation. Increased surface runoff across the exposed surface may carry away ash and dissolved nutrients, making conditions even less favorable for plant growth. Foresters normally consider ground fires unsuited for site preparation, and restrict prescribed burning to periods when the humus remains too moist for complete combustion.

Crown fires occur when surface or ground fires ignite slash piles and dead or living lower branches of standing trees, tree crowns becomes engulfed in flames, and the fire spreads to nearby trees. Crown fires occur in forests during periods of drought and low relative humidity, particularly in areas with heavy accumulations of understory material called ladder fuels (e.g., fallen trees, logging slash, and combustible understory vegetation). Crown fires generate tremendous heat that rises in a strong convection column, drawing in brisk surface winds that fan the flames even more. Heated air blowing across the flames also warms and dries the fuels ahead of the fire, and releases volatile gases from vegetation ahead of the flaming front. Crown fires have environmental effects similar to those of ground fires, killing all trees and shrubs in their path and usually consuming the surface organic layers. Similar to ground fires, crown fires only stop by running out of fuel, or if precipitation cools the fire and wets the fuels sufficiently to inhibit burning. Overall, crown fires have little value for site preparation within forested ecosystems, and have not become common part of silviculture.

Fire prevention measures include the prevention before a fire breaks out and the measures for reducing the damage of a forest fire after it breaks out.
Public Education

Humans are responsible for most forest fires and thus the first step in prevention should be informing, educating and mobilizing citizens about the risks of forest fires. Education should begin at school and continued with several campaigns, seminars, information brochures, tv-shows and commercial spots in the media.
Danger detection systems

Included in preventative measures should be statistics that predict the probability of fire in certain areas helping in the immediate response.

Their aim is to stop the course of the fire and they can be used for providing access to ladder trucks.
Watchtowers

Strategically placed watchtowers for the purpose of detecting fires.
Installation of water reservoirs

In case of fire they are used to provide immediate water.
Patrols

Regular cleaning of road networks from fallen branches, vegetation and flammable materials will also help as break in fast spreading of fire.
Creation of recreation areas

With the creation of camping grounds the danger of starting a fire is decreased because campers are limited to controlled areas.
Heliports

Wireless communication between the Forestry Department and the workers of Forest inspection, that contributes in the prevention and extinguishment of fires.

In some regions of Portugal the use of National Lookout Towers Network is an important element in fire detection in but unfortunately detect a very low percentage of total wildfires. NLNT is a main organized fire detection system, having a total of 236 observation posts. These posts have been placed gradually over the last decades, resulting in a under optimized network. It seems that NLNT is more efficient during the day than other detection systems, but less efficient at night. Geographic Information Systems (GIS) are now researched to improve fire detection effectiveness.

Croatia is a country with high risk of forest fires. They have used a system called Integral Forest Fire Monitoring System (in Croatian IPNAS) developed at the Faculty of Electrical Engineering, Mechanical Engineering and Naval Architecture University of Split. A rather new, technically more advanced approach to human forest fire surveillance is installation of remotely controlled video cameras on monitoring spots. Now the human observer is not located on the monitoring spot anymore. His observation station is the monitoring centre equipped with adequate video presentation and video storing devices connected with wires or wireless to distant video cameras located on monitoring spots. The video cameras based human forest fires surveillance has many advantages in comparison to direct human observation on monitoring spots. Let us mention the most important of them:
a) Using video cameras the human observer is capable of monitoring a wider are covered by few video monitoring field units.
b) Cameras are usually equipped with power zoom so the observer could easily inspect suspected areas.
c) System usually has video storing capabilities, at least for the last couple of days, and that is quite useful for post-fire analysis.

A Swedish company is looking for a license agreement for their design on a family of small, low-cost, non-serviceable and disposable radio-communicating fire sensors to work with early forest fire detection systems. The plan is that lightweight sensor units which have an electronic identity number are placed in trees either from the air or from the ground. When subjected to high temperatures such as fire for a few seconds the sensor transmits a radio signal with a unique identity code.
A study in Spain suggests using multi-sensorial integrated systems for early detection of forest fires. Information and data collected from infrared, visual cameras, meteorological stations, and topography and terrain maps can help in detecting forest fires.

Forest Watch is a smoke detection system used for early detection of forest fires. It is a software programme that uses algorithms of movement detection. The system uses a network of video cameras placed in various towers in the forest. A video software program transmits the data that connects the towers with a central office. There is a watchperson in the central office that observes the video transmissions and records where there is smoke.
Forest Watch can operate 24 hours a day, 7 days a week, and is precise even at night with each camera being able to record up to a distance of 40 km.