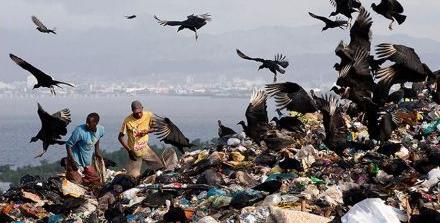 What does the largest landfill in the entire world have to do with you?

Although its placement resides in Rio de Janeiro, the Jardim Gramacho dumpsite has impacts that get covered up all over the world, much like the garbage itself.  So, how does this affect you and why should you care?

First.  Do you know where your own garbage goes once it is thrown out?  Many people don’t.  Try asking yourself this simple question: what landfill does your garbage go to?  It has to go somewhere, right?  There is no “away” anymore.  Not since we are an increasingly global society.  Much of our garbage actually goes to multiple locations on its way to its final resting place.

Second.  With so much trash, or as its called colloquially “municipal solid waste,” just disappearing in our garbage cans each week we ought to know how much is disappearing, right?  Here is where it gets a little scary, so grab your recycling bin and hold it tight.  In America, we average annually 250 million tons of disappearing garbage. Which, when we put this into more general terms, equates to 4.5 pounds, per person, per day.  So . . . the average newspaper weighs in at half a pound . . . so in terms of weight, we might as well just buy 8 newspapers each day this week and throw them right in the garbage.  We hope this is visually stimulating enough.

And third. Still, in the developed world, recycling rates are only around 34%.  Only a third of what gets thrown out is recycled.  This is a travesty given our technological age, and given the sheer ingenuity of human creativity and innovation.  Why must there be any “waste” at all?  Prominent Harvard Entomologist E.O. Wilson shows us, that ants, the smallest of the smallest creatures outweigh humans tremendously in terms of biomass.

And where are their landfills?

In some good news, the Jardim Gramacho landfill site is now thankfully closing, and will begin to harvest the energy of its 60 million tons of decomposing trash.  Let’s continue this trend and close all of our remaining landfills by recycling everything we possibly can.  Paper, Plastic, Aluminum, Glass, whatever else you have.  Find a way to recycle it . . . and if there is no immediate way to recycle it, invent one.  Inventing new ideas is ameliorating for the economy, you and me, and the planet.