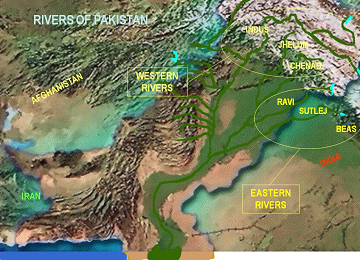 River Ravi is one of the eastern Rivers given to India as a result of Indus Water Treaty and the smallest of five main rivers of Indus system. It originates from the basin of Bangahal and drains in the southern slopes of Dhanladhar. After flowing through the Chamba valley in the North West direction parallel to the Dhanladhar range it leaves the Himalayas at Baseeli in India. While in the mountainous area, the river Ravi flows for about 130 miles with drops down with slope of 15,000 feet at about 115 ft per mile. After crossing District of Gurdaspur it enters Pakistan near Jassar about 120 km upstream of Lahore and it flows down for about 520 km and joins the River Chenab.

The key water usage downstream is for agriculture. For irrigation the crops the diversion works have been done to take its water to irrigation canals.In the Punjab province, Ravi is cruelly affected by the indiscriminate dumping of untreated municipal and industrial effluents. Due to extremely low flows in the winter season the river just acts like a dirty drain due to the discharge of municipal sewage from Lahore city as well as industrial flows generated from industrial clusters from various locations like Kala Shah Kaku-Lahore Sheikhpura Road, Kot Lakhpat Industrial Estate and Multan Road etc.

Some industrial units discharge the wastewater in soakage pits in soil on land which contaminate the groundwater. It is alarming that the use of water of river Ravi for irrigating the crops and vegetables will be severely harmful for soil as well as crops and vegetables. Various research studies show accumulation of harmful heavy metals in crops due to irrigation with contaminated water.

According to International Panel of Experts recommendation minimum river flow is 5000 cusecs/d and 25 MAF once in five years. But the river flow in Ravi has reduced gradually in the last 20 years which has brought devastating effects on the river ecology, fish species, ground water quality, socio economic status and the health of the communities settled along the river Ravi. Hudiara drain discharges maximum pollution load into river ravi which is around 430 cusecs.According to an estimate the total daily discharge into river Ravi from point and non point pollution sources is 2000 cusecs per day.

Different studies conducted by various researchers at academic and government level indicate that the River Ravi is getting severely polluted at various locations due to disposal of harmful untreated domestic, industrial as well as agricultural wastewater.The pollution increases as the river flows from Jassar to join river Chenab, its quality deteriorates tremendously and it receives greatest pollution load from Hudiara drain and Deg Nullah from district Lahore. Due to seepage of surface water, pollutants have penetrated into the ground water which has also become severely contaminated. In the areas whereindustrial drains are present the heavy metals like lead and nickel etc. have entered into the ground water and ultimately in the food chain.

Faecal pollution is also common in these areas which has resulted increased diarrheal diseases as well as various abdominal and skin related other illnesses. During the low flow or zero flow from India the river serves just the purpose of DRAIN.

The statistics show that in the years 2009-10 the flow was 0.28 MAF, due to reduced water quantity in the river the water table is also lowering down in the area situated along the river as there is no recharge from the freshwater rather recharge from the sewerage water is very much detrimental for human beings, livestock and agriculture. Currently water table in the Lahore city is almost 35 meters which is gradually reducing due to over pumping for domestic usage and lack of recharge from the river water.

Environmental laws relating to Protection of water resources should be strictly implemented. In order to stop the discharge of untreated domestic as well as industrial wastewater into the river Ravi.

Environment Protection Agency should strictly implement the National Environmental Quality Standards and force industries to install treatment plants and randomly check (do surprise visits) and monitor if the treatment plant is run regularly or not.Punjab Government, EPD and WASA should take the matter of water pollution seriously and take necessary steps to minimize the municipal and industrial pollution before it may ruin the lives of masses significantly.

Public awareness campaigns should also be started in order to educate people about the role they can play for eliminating pollution of river Ravi.

View all posts by Nosheen Fazal →