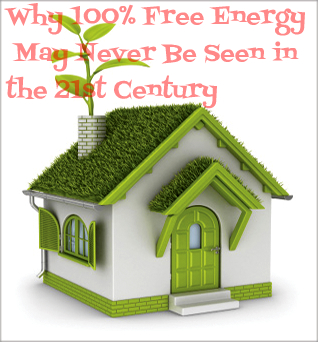 As time continues, the emphasis on greener living increases. Whether you believe that mankind has damaged the planet or not, there is still something strange in the air that we can’t identify. Are we becoming more conscious of ourselves as a species on this planet? Or perhaps it’s just capitalism trying to make another buck by seeing the importance of greener living to the masses.

Regardless of the reasoning behind greener living, energy needs are constantly on everyone’s lips. The planet’s population continues to grow and the energy demands are surpassing the supply. Are companies truly dedicated to provide a cleaner, more efficient, and renewable energy source for humankind?

1. Greed – Regardless of what companies will try to shovel out to the population, the driving force behind nearly every business is greed. Think about it. How many CEOs drive a 1990 Ford pickup with bad brakes and no power steering because they don’t need anything more? What drives people to create a business is to provide a more comfortable way to live. How big is that TV? How fast is that computer? How popular is that car?
Although business owners may have had honorable intentions at first, the need for more stuff takes hold and then it becomes time to hand out raises because he or she just can’t afford to live without that 72-inch LCD television. If they truly cared about the world, they would supply themselves with enough money to provide a comfortable living. Comfortable in this case means to exist without worries of piling bills, not owning a mansion so you can fill it with more stuff.

It’s simply not profitable to give away free energy. After all, the equipment and manpower that goes into building solar arrays and wind turbines has to come out of someone’s pocket. But does it really have to cost $45,000 to cover a side of your roof with solar panels?

You May Also Like : Going Green: Five Benefits to Solar Energy in your Home

2. Labor – Although greed is a powerful force behind the cost of goods sold, the ability to pay for the labor needs to be added as well. If free energy became a reality, millions may lose their jobs. Those who are involved in coal, oil, and nuclear power in some fashion would find themselves on the unemployment line. However, would they need to stay there for very long?

Every year, adults re-examine their lives and decide to change career paths. These men and women decide to enroll into a college in order to further themselves in this new career. Couldn’t those unemployed energy workers do something similar? Is it really that difficult to shift one’s focus for the improvement of humanity?

Free energy wouldn’t just benefit homes. If energy was free for all to use, the price of goods would drop as the cost to make the product reduced. This means the population wouldn’t have to make as much money in order to live. That is, until greed reared its head again and let the prices remain.
3. Power – Those who control the oil has the power of the world in their hands. Although we are slowly weaning ourselves off of this archaic form of energy, this is still true. The influence of oil is still strong and will continue to be so. As oil companies may state to the public that they are investing in renewable energies, they still build additional pipelines and drills for more of that black sludge that runs the world.

We were pulled into World War II because of oil. As we shut down Japan’s oil supply, they attacked Pearl Harbor. We barged into Kuwait to “help them” let alone protect our oil supply. If anyone was to threaten the supply of oil in any way, you can be assured that there is an oil-baron ready to attack. In this case, power and greed go hand in hand as it usually does.

What would happen if everyone in the United States decided to stay home for just one day? You’ve seen those emails where they try to convince you and others to buy gas from a single oil company in order to drive a price war to decrease the amount at the pump. Theoretically, it would work. The problem is, only a handful of people are willing to sacrifice in this way. If everyone decided to call in sick for just a single day, there would be chaos.

It may be construed as a socialist view, but humanity should be more focused on self-improvement and continuation of the species, not continuation of a bank account. Unfortunately, people of this planet cannot work together without asking the question, “What’s in it for me?” Until we shake this damaging way of thought, free energy and the right to live will always be on the back-burner as nothing more than a notion that would be nice to experience.