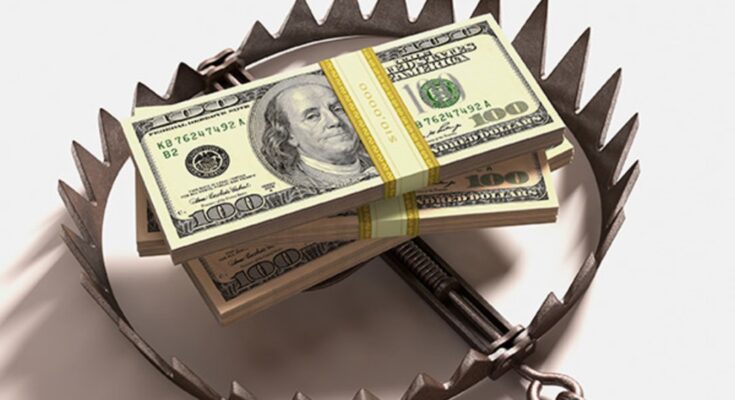 The first known banknotes in the world came into existence in China during the Tang and Song dynasties, as early as the 7th century CE. “Flying money” was used by wealthy merchants and government officials to transfer value from one location to another, coming in the form of a receipt that could be exchanged at a bank for local currency.

As the concept and technology of money evolved over time, so too did another human invention: deception.

We see dishonesty in everyday language, between friends and between strangers, in the evasive responses that politicians give to unwanted questions with unsympathetic answers. Given our anchoring in capitalism, deception is most powerfully leveraged through the marketing and sales techniques that convince people they have need of one product over another — or, that they have need at all.

Dariusz Galasiński defines deception as “a means of constructing and maintaining a preferable version of reality.” Hanging over this phrase, of course, sits a question — preferrable to who?

Plastic by any other name

In the banknote printing industry, there is an alarming trend that sees companies trying to do away with traditional paper/cotton notes in favour of plastic ones. Arguments generally revolve around matters of cost efficiency, durability, security, and even on occasion, dubious environmental benefits.

Businesses have become rather adept at selecting the right language for the job. The same marketing techniques that saw the worrisome term “global warming” quietly replaced with the less threatening “climate change” are being deployed once again.

Banknotes are not plastic: they are “polymer.”

In place of the besmirched term, the industry has chosen to make use of a technical synonym, one with connotations of modern innovation, engineering — an identifier both clean and scientific.

The industry’s avoidance of the original word only serves to illuminate the deliberate effort to conceal, and the reason is very simple: with the oceans filling with plastic, the ice shelves disappearing, and extreme weather becoming common — it is a difficult sell to say, “what the world needs now is more plastic pollution.”

While plastic is undeniably unsustainable, being derived from fossil fuels, industries continue to turn to it for new avenues to profit. First developed for mass production in the 50s, the volumes of plastic that we are now producing have become staggering. In 2015, global plastic production reached 407 million tons per annum.

The fitness of paper

Since the Tang dynasty’s paper monetary notes, the technology has come a long way. The cotton paper that has for hundreds of years functioned within national economies has evolved through a constant arms race, pitted against the ingenuity of forgers and criminals.

Today, paper banknotes are incredibly technologically sophisticated. They feature dozens of different forms of security in microscopic design characteristics, on their surface and threaded through the paper itself.

“Paper is much more secure than it used to be and the new [British] £50 note, for example, has features that are extremely hard to counterfeit,” according to Tom Hockenhull, curator of the Modern Money exhibition at the British Museum.

One argument made in favour of plastic notes was that they were more secure than paper. But commentators have pointed out that this is a faulty or, at the very least, outdated notion. As quickly as some companies are taking up plastic notes, the security gap between the two materials is closing. More successful plastic forgeries emerge every year.

With the ground on which pro-plastic claims are being made receding, reasons for supporting plastic in banknote printing are growing fewer and fewer all the time. Most crucially of all, no amount of clever language or marketing spin will render plastic sustainable. If the environment is to thrive, that is say, the planet to survive ­— we need to reduce plastic production, not to find new industries through which to thrust it upon the world.