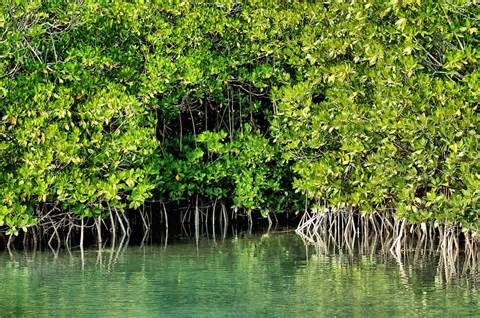 Pakistan’s coastal area is an arid sub-tropical desert with 1,050 kilometers long coastline of which one-third is in Sindh and the rest in Baluchistan. The average rainfall is 100-200mm per year, and that too, sporadic. The Indus Delta is spread over 600,000 hectares along the southern Arabian Sea Coast in Sindh. Out of these, 260,000 hectares are covered with mangroves mainly in the Indus Delta swamps.
In addition, small pockets exist in deltaic swamps of other small rivers namely Basol, Dasht, Piroli and Winder which fall into the Arabian Sea in Balochistan. Mangroves thrive on a continuous supply of fresh river water but due to the construction of dams, a lot of water is diverted into smaller reservoirs and irrigation canals before it reaches the delta thus decreasing the discharge of fresh water.
The mangroves are sixth among 92 countries of the world which thrive at the mouth of the Indus – the sixth largest river and the Indus Delta – the fifth largest delta. This delta is an important flyover for migratory birds from Siberia and these mangroves are an important stopover for many winter birds. They are the arid coast mangroves which grow in high salinity areas with low rainfall and spread over the largest area among the world’s arid coast mangroves.

The ecosystem is dominated by a single species called Avicennia marina which forms 99.9 per cent of the total crop. Perhaps, the most important aspect of these unassuming plants is their ability to act as physical barriers to cyclones and typhoons. The recent cyclone to hit coastal areas of Thatta and Badin districts would not have been so intense, if the previously present mangroves had been wiped out to make room for human development. The roots trap the sediment that is brought into the sea via the flow of the Indus and its tributaries. This helps in keeping the sedimentation level of the harbour under control. With the depletion of these plants sedimentation level is increasing and is a sign of concern for port authorities.

The micro-organisms, plants, animals and people, all are part of the mangrove’s ecosystem. The living things mainly rely on soil and water for sustenance and growth. The micro-organism is an invisible but essential part of the ecosystem. They digest the dead leaves of the plants and recycle the nutrients for the mangroves and other plants and animals. Fish such as sardines and palla and other creatures such as crab and shrimps either live in the surrounding waters or spend a critical part of their lives here. Breeding grounds and nurseries for water fowl, fish, shrimps, snakes and other fauna, they form essential ecosystem with perhaps more biodiversity than the rainforests.

Fish and shrimps are not only important for the ecology but also help in boosting the economy through exports. Shrimp export of 60 per cent is the major chunk of fish exports at the value of $100 million. Around 14 species of sea snakes use these mangroves as a breeding ground. During winter many species of water fowls, including pelicans and flamingoes make the Indus Delta their home. Over 60 species of these birds are found in the mangroves. Jackals, herds of camels can also be found on many islands, along with a few rodents. More fascinating is the different species of dolphins seen swimming around the creeks. Coastal villagers are also a part of the ecosystem. They use wood as the fuel. The dominant species in these parts, the Avicennia marina, is not as good as wood from other mangroves; however, it is still used by the local people.
Globally, the Islamic Republic of Pakistan is recognized to have one of the largest mangrove forest covers in the world, protecting the lands from the viciousness of the open sea, and maintaining its productivity. In an agricultural based economy, a buffer against the sea is all the more important. Given the last few decades, the country has witnessed a startling decrease in the mangrove cover. Due to the felling of trees for its usage for fuel and other such purposes, the costal areas are witnessing a direct attack on the one and only protection it has against salination. Even though the government and various other organizations have initiated programs and projects to counter this growing menace, it seems that unless a massive overhaul is not taken, unless a massive change in the perception of the people is not executed, then we may witness a slow yet torturous destruction of the costal areas.

The phenomenal importance the mangrove forest holds to Pakistan, their spread, species and location, the reasons behind its depletion and projects done to counter the mangrove depletion. Only praying and hoping for a miracle is not enough. We must act; we must do our part to protect our costal areas. For this purpose we have done extensive research from secondary sources of data including environmental journals, articles by activists and environmental researchers. Mangrove forests are one of the world’s most threatened tropical ecosystems . More than 35% of the world’s mangroves are already gone. The figure is as high as 50% in countries such as India, the Philippines, and Vietnam, while in the Americas they are being cleared at a rate faster than tropical rainforests.
Threats to mangrove forests and their habitats include:

Clearing: Mangrove forests have often been seen as unproductive and smelly, and so cleared to make room for agricultural land, human settlements and infrastructure (such as harbour), and industrial areas. More recently, clearing for tourist developments, shrimp aquaculture, and salt farms has also taken place. This clearing is a major factor behind mangrove loss around the word.

Over harvesting: Mangrove trees are used for firewood, construction wood, wood chip and pulp production, charcoal production, and animal fodder. While harvesting has taken place for centuries, in some parts of the world it is no longer sustainable, threatening the future of the forests.

River changes:Dams and irrigation reduce the amount of water reaching mangrove forests, changing the salinity level of water in the forest. If salinity becomes too high, the mangroves cannot survive. Freshwater diversions can also lead to mangroves drying out. In addition, increased erosion due to land deforestation can massively increase the amount of sediment in rivers. This can overcome the mangrove forest’s filtering ability, leading to the forest being smothered.

Over fishing: The global over fishing crisis facing the world’s oceans has effects far beyond the directly overfished population. The ecological balance of food chains and mangrove fish communities can also be altered.

Destruction of coral reefs: Coral reefs provide the first barrier against currents and strong waves. When they are destroyed, the stronger-than-normal waves and currents reaching the coast can undermine the fine sediment in which the mangroves grow. This can prevent seedlings from taking root and wash away nutrients essential for mangrove ecosystems.

Pollution: Fertilizers, pesticides, and other toxic man-made chemicals carried by river systems from sources upstream can kill animals living in mangrove forests, while oil pollution can smother mangrove roots and suffocate the trees.

View all posts by Wajeeha Alam →