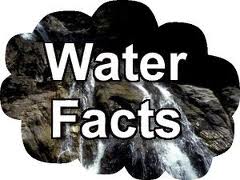 Water is the most abundant compound on Earth’s surface,Covering about 70%,In Nature it exist in Solid,liquid and gaseous state.Like many substances water can take numerous forms that are broadly categorized by phase of matter,The liquid phase is most common of its other phases,Water has the second highest specific heat capacity as well as high heat of vaporization.

We can say that it is the essential compound for living being,due to its broad spectrum properties,usage and benefits in every aspect of life its importance cant be neglected.

Now a day a phrase “water crises” taken up into the minds of every person in this universe,shortage of water,deaths due to water born diseases,water usage for industries and many more creating a hype among the people and creating ecological imbalance,hydrological imbalance and many other problems for the environment and for living beings.

There are some amazing,interesting and shocking facts and figures about water as below: