Hello Doctors! Are you a doctor who is reading this? I guess, not! So what made me call you a doctor? Yeah I said it metaphorically or sarcastically, to be more appropriate. Having a little know-how of medicine, the functionality of the human body and getting to experience or witness some diseases, we think we have mastered over their knowledge and now we can enlighten the entire humanity with the healing power of our recommended diagnosis and medication.

This self-diagnosis is so common around the globe and dangerously in our culture that we don’t even give a second thought while recommending some medicine to our sibs, pals or colleagues. Little do we know about the depth of the ailment and in a flash, we handover the prescription. We don’t just do it to others but we gladly google our own symptoms too and take the medicine without proper advice from the actual doctor.

You must know how dangerous Self Diagnosis could be, as it may deceive you to an altogether wrong conclusion. To illustrate it, let me share with you an essay, by Jerome K. Jerome, that was a part of a course in high school. It’s called “A man who was a hospital”. I don’t remember it fully but you will get the underlying idea. It starts with a man who was reading a leaflet of a patent medicine, describing the symptoms of liver disorder. He somehow felt the symptoms and believed that his liver was out of order. He went home and to satisfy the curiosity he opened the encyclopedia of ailments and every page turn began to make him feel sicker than ever. Psychologically, he was affected enough to make a decision of going to the library, so he may alphabetically go through the diseases and symptoms and figure out the plan for the remaining few days of his life. The following day, he did exactly the same. According to him, except Housemaid’s Knee, he had all the diseases known to medical science. He could project himself being an interesting subject for the medical students where they possibly will get the knowledge of each and every disease without going from hospital to hospital and patient to patient. With all these disturbing and confused thoughts, he went to his doctor and told him that he had little time left. The doctor, after listening to his entire history, wrote a prescription, folded it and handed it over to him. With insanely puzzled head, without reading the prescription, he went to the chemist to get the required medicine but the chemist showed his inability to provide him the prescribed remedy. The man signed in utter disappointment and came home. When he unfolded the paper he found “Don’t stuff your head with the things you do not understand”. 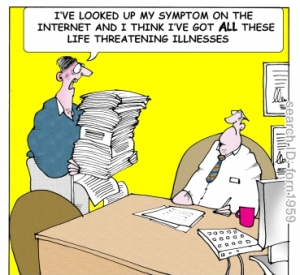 You see how this story ridicules the common man who, just by reading a leaflet, ends up being messed up and entangled into misery. Not entirely like this man, but we all end up upset and harm ourselves with the medicines, if we try to diagnose ourselves with the help of internet. Being not-the-doctors you must know that you don’t even know how to carry out a diagnosis. Your own superficial knowledge may lead you to take the serious symptoms lightly, like a prolonged stomach ache with vomiting may be considered as food poising where it may be as serious as a Crohn’s Disease. On the other hand, you may get to exaggerate the symptoms by overly worrying about the signs and end up tormenting your family as well. In both cases, you will be the one to face the circumstances.

Not just checking up the symptoms yourself could be unhealthy but when it comes to medication, you call upon the dangers to your health. Some medicines tend to mask the actual symptoms and the real disease may get to hide itself when you visit the doctor. The medical stores are loaded with the medicines that don’t ask for the doctor’s prescription and their attractive marketing with the promised benefits make you buy them. The most common of these are multivitamins, pain killers, sleeping medicines, which many pharmacy stores sell without doctor’s prescription. Even before taking any sort of supplements or multivitamins, you must refer to your doctor.

It is not wrong to trust your own instincts but it should lead you to your doctor and not to the medical store or internet for diagnosis. There might have been a time where your diagnosis matches with the doctor’s but that is merely a coincident. That one time experience must not motivate you to repeat the process in hope for accurate outcome. With all your mouse-clicks leading to research, you do not become an MD. Do what you are supposed to do and let the real doctor do his job.

View all posts by ghalia akram →