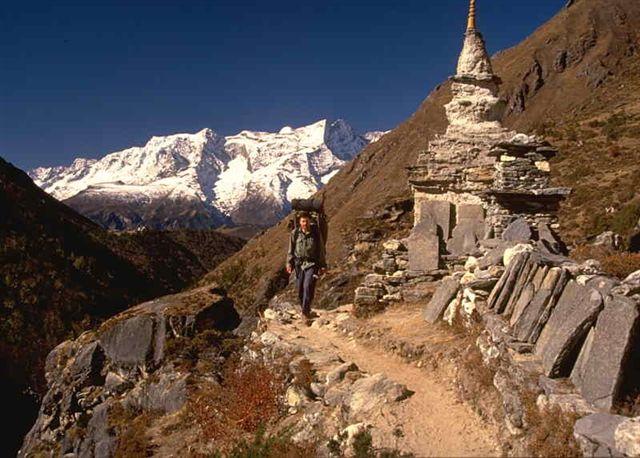 An overview of Nepal

Situated on the lap of Himalayas, Nepal is a landlocked country in South Asia. It is bordered to the north by the People’s Republic of China, and to the south, east and west by India with an area of 147,181 square kilometers, stretching 800km from east to west and 144 to 240km from north to south. The elevation of the country ranges from 60 m above sea level to the highest point on earth, Mt. Everest at 8,848 m, resulting in climatic conditions from sub-tropical to Arctic. Nepal is divided into 3 distinct topographic zones: Terai, Hill and Mountain; 5 developmental region and 75 districts. The Terai region is a flat plain in the south running from east to west covering 20 districts with the elevation range from 60 to 300 m. It has a tropical to sub-tropical climate with the main tropical region in the east, and drier areas in the west. The hill region is a wide belt of land aligned east to west in the middle part of Nepal covering 39 districts with elevation from 300 to 2000 m. The mountain region occurs at elevations above 2000 m and covers 16 districts. (http://www.fao.org/ag/AGP/AGPC/doc/Counprof/Nepal.htm#1). The diverse climatic condition existing here makes this beautiful small country a hot spot for the existence of diverse pathogens and easy emergence of new ones.

Climate and weather are important components of complex ecosystems. However, the change in climatic factors which are evident as increase in the global average temperature, change in seasonality, ocean warming, more intense precipitation and alterations to the rainfall patterns are leading to the instability in ecosystem and thus have altered the pathogen transmission profiles and increased the host susceptibility. (http://www.nyas.org/Events/Detail.aspx?cid=aa4086a1-6917-4cd3-b14f-7317214ed96c ). In the last 100 years, the world has warmed by approximately 0.75oC and over the last 25 years, the rate of global warming has accelerated, at over 0.18oC per decade. Sea levels are rising, glaciers are melting and precipitation patterns are changing. Extreme weather events are becoming more intense and frequent. Climate change affects the social and environmental determinants of health like air, water, food etc. Many of the major killers such as diarrheal diseases, malnutrition, malaria and dengue are highly climate-sensitive and are expected to worsen as the climate changes. Climate change is likely to lengthen the transmission seasons of important vector-borne diseases and to alter their geographic range and the countries with weak health infrastructure like most of the developing countries will be the major victim of climate change impact (http://www.who.int/mediacentre/factsheets/fs266/en/).

Dengue fever (DF): Dengue fever is an acute infectious disease caused by dengue virus and transmitted by the Aedes species of mosquito. There was no documented case of dengue before 2004 in Nepal. For the first time Nepal experienced major outbreaks of DF in several districts in 2010, particularly in Chitwan and Rupandehi districts. Until 2006 DF was reported in only nine districts but in 2010 outbreak patients from 24 districts admitted in “Sukraraj Tropical and Infectious Disease Hospital” were confirmed to have DF. This shows DF is geographically expanding and infecting people even in high altitude zones becoming one of the major emerging infectious diseases of Nepal (Pun, 2011).

Japanese encephalitis (JE): Japanese encephalitis is the mosquito borne zoonotic disease. Since late 1980s it has been endemic in the lowland plains (Terai and inner Terai region) of Nepal. After the first report from Kathmandu valley in 1997, this disease also reported from other districts of Hill region. Beyond the conventional logic of high altitude, the Mountain districts previously silent for this disease also started reporting cases from 2005. Till now 54 out of 75 districts of Nepal have reported Japanese encephalitis cases and the number of districts endemic for this disease are increasing. Presence of mosquito vector and infection in pig (the major amplifying host) reported from those hill and mountain districts are also confirming the geographical expansion of Japanese encephalitis in Nepal, making this disease a public health concern. Climate change favoring adaptation of vectors to hitherto cold climates is regarded as the key factor responsible for geographical expansion of JE together with the other factors like heavy rice farming under flooded irrigation, inflated pig husbandry without sanitary considerations and lack of awareness and preventive measures (Dhakal et. al., 2011).

Visceral Leishmaniasis (VL): Visceral leishmaniasis was mainly confined to southeast area in the Terai region of Nepal. However the disease is now being increasingly diagnosed from the non-endemic hilly areas as well (Pun et. al., 2011).

Rotavirus infection: Rotavirus is the most common cause of acute infectious gastroenteritis in young children and is associated with substantial morbidity and mortality worldwide, mostly in developing countries. The number of patients infected with rotavirus is increasing and there is need of continued surveillance of this disease in different regions (Pandey & Pun, 2011).

Other emerging infectious diseases: According to WHO (http://www.who.int/inf-new/tuber4.htm) up to 90,000 people have active tuberculosis and there are 44,000 new cases every year. Regarding malaria the incidence of cases is 4.1 per 1000 population at risk (http://nepalccm.org/resources/malaria/pdf/nationalmalariastratagy.pdf). Campylobacteriosis, Chikungunya, Prion diseases, Hanta virus infection, Lassa fever, Lyme diseases, Tuleraemia, West nile viral infection etc. are some other emerging infectious diseases throughout the globe which are still not investigated and/or gone unnoticed in Nepal.

All the countries round the globe are facing negative effects of climate change and the burden is even higher in developing countries like Nepal. In Nepal, climate changes together with other factors have hit on health sector either by supporting for geographical expansion of the pathogens or favoring for emergence of new pathogens. There is need of screening of new and emerging diseases as well as carrying out research to understand the epidemiological trend of existing diseases. Sound early detection, reporting, prevention and control strategies for all these emerging infectious diseases are what Nepal needs for healthily living.

I am a veterinarian from Nepal. Working as a young researcher and veterinary officer at National Zoonoses and Food Hygiene Research Center, Kathmandu Nepal.

View all posts by Santosh Dhakal →

One Comment on “Climate change and emerging infectious diseases in Nepal”