If you’re looking to make a positive impact on the environment, finding ways to go green at home is a great place to start. From the simple to the very expensive, there are different ways to have a green impact, no matter your budget. 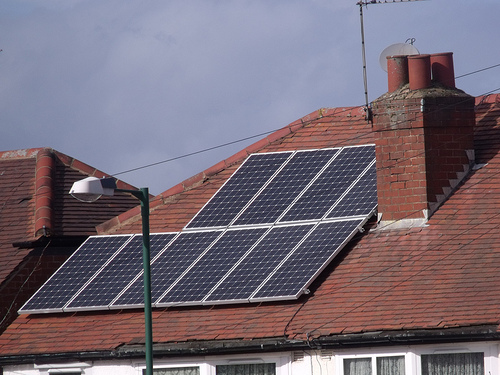 Solar panels, also known as photovoltaic cells, are great for people looking to cut down on pollution while simultaneously cutting back on electricity expenses. You’ll need to have the money up front to spend, though. A typical solar array’s installation costs an average of $30,000. Fortunately, you’ll have a chance to recoup a lot of that first cost through green energy tax credits, incentives, and rebates.

After tax rebates, you’re looking at an up front cost of about $18,000 and about six to ten years on average to recoup that price. Take this example of a family in New York State: if they spend $32,000 on a solar array, they’ll expect a federal rebate of 30 percent along with a rebate of $12,000 through the New York State Energy Research and Development Authority. The family will probably have a total cost of $5,400 for the solar array after all incentives, federal and state, come in.

Looking to go green while you’re on the road as well? Look no further than electric cars. Many environmentalists have claimed for years that electric is the way of the future. However, the future is taking a bit longer than some thought to arrive. In fact, electric cars have existed since around the time of the very first cars. Henry Ford even had his own electric Model-Ts.

As cars evolved, electric vehicles lost out to their gas-powered counterparts. Gasoline has much more power per gallon, and batteries never found the capacity to move cars far. For a long time, electric cars were nothing but a toy for those who valued saving the environment above all measures of convenience.

But now, times are changing. Electric cars are joining the mainstream, and they have the power to take you quite far, providing you power up once in a while. Most cars have USB ports now, so be sure to explore your cable internet options and download music and movies for that upcoming road trip!

Even if you’re not super tuned-in to green technology advances, solar arrays and electric cars have probably come in on your radar. Rainwater harvesting systems, however, could register as something new. These simple mechanical systems connect to your gutters or other rooftop water collection systems. Then, they keep rainwater ready for later use in things like flushing toilets, irrigation, and water systems.

Better yet, they’re very inexpensive. Especially if you install the system yourself, rainwater harvesting systems are a great way to go if you’re looking to go green on a budget.

Whether you’re looking to do little things like harvest rainwater or have the money to invest in big changes like an electric car or solar array, it’s possible to go green at home.

Joe Fortunato is a freelance writer from Tampa, Florida. He enjoys learning about new subjects, following his Baltimore Orioles, and traveling the country for fishing. You can find Joe on Twitter at@joey_fort.