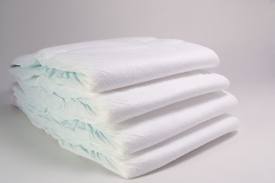 Most babies wear diapers nearly 24 hours a day and those diapers are in constant contact with both skin and mucus membranes. If chemicals are presents in diaper it harmful for baby’s skin. Disposable diapers are used in very excessive amount in now days. Many new parents choose disposable diapers, never realizing the toxic threat they pose to their babies.

Disposable diapers are made up of many chemicals like Dioxins, Volatile Organic Compounds (VOCs) and Sodium Polyacrylate (SAP) etc. Many baby diapers are bleached with chlorine, resulting in remaining traces of dioxins. According to the World Health Organization, dioxins are “persistent environmental pollutants” that can cause an array of health problems including developmental delays, damaged immunity, hormone interference, and certain cancers. Even if dioxins don’t wind up in the diapers after bleaching, they do wind up in the water and thus, the food supply, creating an environmental health problem from the manufacture of diapers.

Many disposable diapers release VOCs such as ethylbenzene, toluene, and xylene. According to the EPA, some VOCs are carcinogens. Others can cause neurological problems, eye irritation, and decreased immunity. As well as the absorbent center in disposable diapers is made from SAP. Once used in tampons, SAP was responsible for the cases of Toxic Shock Syndrome associated with the products. SAP also irritates skin, can cause staph infections, and may be related to other health problems, as well.

Disposable diapers also have bad effects on environment like, lake of quick biodegradability and produce seven times more solid waste when discarded and three times more waste in the manufacturing process. In addition, effluents from the plastic, pulp, and paper industries are far more hazardous than those from the cotton-growing and -manufacturing processes.

There are some good alternatives to disposable diapers that save money, as well as being better for the environment. Traditional cloth diapers produce no waste at all, as they can be washed along with the laundry, so there is no trash. There’s also a new product called GDiapers, which is a hybrid diaper with a disposable insert, which can be composted or flushed and leaves less impact on the environment. And, it also has a washable cloth cover, which also looks much cuter than a disposable diaper. They’re a little extra work, but well worth the advantage of a smaller footprint.