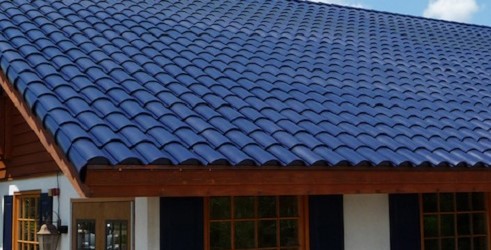 As the world divests itself from fossil fuels, alternative energy sources must take their place. Residential solar panels have rapidly grown in popularity over the past decade, thanks in large part to governmental tax rebates and incentives. Many homeowners have installed solar panels with the goal of saving money on their electricity while also becoming somewhat independent from their local utility. Tesla, a pioneer in the movement towards electric vehicles, has recently announced their newest product – a replacement solar roof. The difference between Tesla’s roof and regular solar panels is that the roof will completely replace your home’s current roof. Made of a combination of solar-enabled glass tiles and non-solar glass tiles, this sleek design has reimagined the future of residential solar.

The chief benefit of solar is to the environment. When installing solar, homeowners are making a conscious effort to consume energy that is produced without burning fossil fuels. The importance of the reduction in greenhouse gas emissions that cause climate change cannot be overestimated.

Solar panels also increase the efficiency of the grid itself. Because any house with solar power reduces the load on the grid and, in many cases, sends power back to the grid, all of the infrastructure in place to deliver power to homes in the area will have a lighter load placed upon it. Since a home that is producing its’ own electricity through solar power can be thought of as a miniature utility, the large utilities actually benefit from the power they are producing as well. The panels are maintained by the homeowner, not the utility so they get the benefit of having any excess power supplied to the grid by that home, without having to worry about upkeep or maintenance for the panels.

Due to net metering, homeowners who have solar panels and send power back to the grid can choose either a rebate for the excess power or have a credit to put towards their future bill. The net metering rules vary, and it mainly depends on the applicable federal, state, and local laws for your region. This is the biggest difference between regular solar panels and the solar roof – the solar roof has an integrated Powerwall battery system, which allows you to store excess power your roof produces so that it can be used at night or whenever you need more electricity than your panels are producing. The addition of the battery storage makes solar roofs a completely different competitor in the residential solar market, since homeowners do not need to rely on the utilities for additional power.

Tesla’s solar roofs are still in the very early stages of production, however, some residential installations have begun. Currently, the biggest impediment is the cost factor – they generally are not a feasible investment for most homeowners right now. Let’s compare the four investment possibilities if you are considering making the switch to residential renewable energy. They are:

•The cost of installing a solar roof

This may be a good option if you need to replace your current roof, and are interested in going solar
•The cost of installing solar panels

If your roof is relatively new, just installing solar panels may be the best choice for you
•The cost of repairing a damaged roof and then installing panels compared to the cost of simply installing a new solar roof

If you have a damaged roof, or an older roof it will need to be fixed before considering installing solar panels. However, if you are considering a solar roof instead, that will just be a one-step process instead of two (new roof then solar panels)
•As a control, the cost of installing a normal roof

If you currently need to replace your roof, and to give us an idea of the price-by-price comparison

For purposes of this comparison, any solar roof should wind up costing less than $24.50 per square foot. If it costs more than that, then it is not competitive with a roof with standard shingles on a home with normal electrical service. As an example, consider a home with a roof that covers 3,000 square feet. The solar panels or full solar roof for that home should cost no more than $23,500.

Now, that is not to say that someone who simply wants the latest technology cannot buy whatever he or she wants. Full solar roofs can cost more than $100,000. Fortunately for the solar buyer, Tesla’s solar panels come in at only $21.85 per square foot, which leaves more than enough money to be able to afford the batteries necessary to store excess power for use at night and on inclement weather days. Tesla calls this type of battery a Powerwall.

Comparatively, traditional roofs cost between $5 and $10 a square foot, depending on the materials. Considering the roof from the previous example, the maximum cost of the roof would be $30,000. Many homes in the United States average about $200 monthly for their electricity, which comes out to $2,400 annually. Assuming that the person in the example home stays there for 30 years, the cost of the roof plus the cost of the monthly bill comes out to roughly $100,000 – $105,000, counting possible variances in the bill.

The savings per month using the solar roof instead of purely traditional electricity is roughly $270 if one considers a Michigan address with 70 percent maximum solar coverage. Over 360 months, that’s $97,500. That’s not quite free power, but almost. If one factors in the cost of the installation and materials, which can be as much as $50,000, the savings are still substantial at $47,500.

Those savings are irrespective of solar energy credits from either the federal government, state government, or both, which would underwrite part of the installation cost. One must also remember that stored power can be sold back to the electric company in one way or another. And, as efficiency rises, prices will go down, and that will increase the solar-powered homeowner’s savings greatly over time.

Solar power for the home, once thought to be unattainable by any except the exorbitantly rich, is now accessible to the general public. Even if a company does not offer the option to finance the cost, homeowners always have the option of a property-backed line of credit or second-lien position installment loan to cover the cost. The energy savings and “sell-back credits” could contribute to the swifter repayment of the loan too. In all, the environment will benefit, and so will the homeowner and the company making the solar panels.