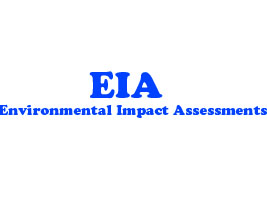 Environmental impact assessment is conducting to estimate the impacts of an upcoming project on local communities, bio diversity and other components of this locality. EIA is necessary especially for mega projects to meet legislative requirements from government while small scale projects are generally proceeding with IEE. But due to lack of knowledge about EIA in developing countries there are so many myths about EIA.

One myth about EIA is that it’s anti development and developed countries using it against developing countries as stumbling block in their path of poverty alleviation programs. But it is not true because EIA is only banning those projects whose disadvantages are more than advantages and whose adverse impacts can’t be mitigate. it is not banning each and every project and if EIA is really an anti development tool than why all developed countries conducting it before each project.

Second myth about EIA is that “EIA is a paper tiger” they argue that EIA is conducting as a formality to meet the legislative requirement of government while the project is already designed. But actually EIA is providing you an insight of your coming project it telling you the actual status and the future of your project. It basically stops you from reinvention of the wheel’. If your project is not delivering the desired results you will doing it again and again which will wasting your money and time. EIA is not only formality but it is one of the most important initial steps of that project.

Third biggest myth is that EIA is expensive. Some organizations are asking that either they will afford EIA or not. So first of all EIA is not as much expensive because according available literature about EIA it is approximately 0.1% to 0.5% of total projects budget at large scale projects. But most donor organizations especially UN, World Bank and others are paying for EIA and they are including the expenses of EIA at their funds.

After analysis of all above myths about EIA it clearly indicates the lack of education about this important environmental tool. EIA is economic appraisal tool for any project they giving you the idea and authenticity of your upcoming work. EIA telling you before the start of your project that will it achieve the specified objectives or not and what will be its benefits and losses of this project.EIA is avoiding your work from repeating again and again for the sake of your supposed goals and at large scale projects they may be permanently banned or you may the investor will itself leaving it uncompleted because once you completed your project and it not delivering you your desired results then you need to reshape or repeat it which need more budget and your project will going beyond your budgets and allocated resources.

Write to author at: sajedali2003@gmail.com