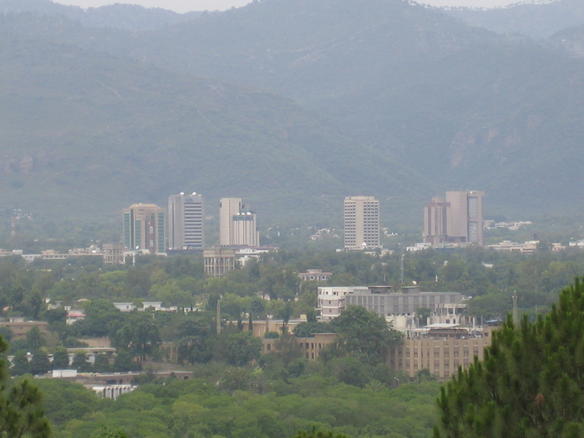 Islamabad is known as the capital of Pakistan and the 9th largest city of the country with the mark of 1.5 million population residing in the city. It is one of the most attractive and urbanized cities of Pakistan with the modern and beautiful architecture and landscapes at the base of Margallah Hills. It features clammy subtropical climate with warm and dry springs, hot and humid summers with the additional feature of Monson season. A city having a huge number of inhabitants with their needs higher than the total resources of the city, also have huge environmental and socio-economic problems.

Industrial productions generate the waste and by-products. Can u imagine how much waste Islamabad is producing now? How much it is affecting the inhabitants of this city? One can just think and imagine.  According to the survey conducted by Pak EPA and CDA in 2004, the total waste produced from industries is 2,325.3 tons in 6 days and its average is 387.6 ton/day.  If we imagine the amount and multiply it with 30 days a month, considering the fact that it increases every month, we can conclude that the rate of waste production increases, as the population increases.

The population boom calls for more resources, to fulfill the needs of the people, which result in increased waste quantities. Presently, Islamabad looks like an industrial hub. Time to time, waste generation rate is increasing and creating lot of problems for the residents of Islamabad including health problems, aesthetic problems and also pollution which is on the top of all the problems.

Health problems occurring and spreading fast in the city. Heavy traffic, smoke from the industries, and waste from the industries are polluting the natural environment of Islamabad. Chemical industries do not have environmental management plans to recycle their waste and they are putting the hazardous waste open into the land that is mixing with the soil and causing the soil to drop it original fertile nature. The soil is contaminated with the toxic materials that lead to the toxic crops for the residents of Islamabad, ending up in several diseases.

Noise pollution is also making a mess in the city. As population grows, the need for transportation is also up surged and I personally noticed that every other house in Islamabad is having up to two or three cars per house.  Therefore, we could clearly estimates that how much noise would have be generated and the residents living along the main highways of Islamabad are having lot of problems due to this noise pollution

I noticed that global warming is also badly affecting this city. The uneven rainfall patterns, changes in the occurrence of seasons, this all is due to the industrial and vehicles smoke they produce per day. Islamabad received a record breaking 620 millimeters of rainfall in just 10 hours in back years.

Islamabad city possess beautiful and modern architectures, clean roads and proper waste management systems in some of the sectors of Islamabad, created by the hard work of CDA. However, in the end I am leaving my readers with a question. We see that all the residents and the authorities are working for the development of Islamabad, but except for some sectors that have been developed; the rest of sectors seems to be deeply underdeveloped and encounter bad pollution scenarios. Do you think those sectors are not the part of Islamabad? Don’t they need the best standard of healthy life as the other sectors have? Where is the Pakistan Environmental Protection Act 1997?

If a common man cannot afford to live in the luxurious sectors of Islamabad, this doesn’t mean that he should be avoided or neglected. I personally visited the industrial sectors of Islamabad and I can’t even tell you the current situation, as they were badly beaten by the curse of pollution. They need to be developed too, they should be given a healthy life standard and their environment needs your special care!