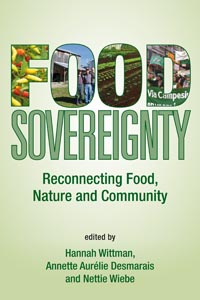 Who Owns Nature? It is a report published by the ETC Group that warns of corporate concentration, commodification of nature; highlights global resistance grounded in “Food Sovereignty”.

The 48-page report, “Who Owns Nature?” focuses on corporate concentration in commercial food, farming, health and the strategic push to commodity the planet’s remaining natural resources. ETC Group, an international advocacy organization, has been monitoring corporate power in the industrial life sciences for the past 30 years.

In a world where market research is becoming increasingly proprietary and pricey, the report discloses market share of top 10 industry rankings up and down the corporate food chain. All the corporations identified in the report are transnational who collectively control a staggering share of the commercial products found on farms, in our refrigerators and medicine cabinets.

The report reveals that:

With collapsing systems – ecology, climate, food and financial – as the backdrop, the report warns that, with engineering of living organisms at the nano-scale (a.k.a. synthetic biology), industry is setting the stage for a corporate grab that extends to all of nature.

Advocates of synthetic biology – the creation of designer organisms built from synthetic DNA – are promising a post-petroleum future where fuels, chemicals, drugs and other high-value products depend on biological manufacturing platforms fuelled by plant sugars. In the 21st century “sugar economy,” industrial production will be based on biological feedstocks (agricultural crops, grasses, forest residues, plant oils, algae, etc.) whose sugars are extracted, fermented and converted into high-value products. Synthetic microbes will become “living chemical factories” that require massive quantities of plant biomass. The report warns that corporations are poised to appropriate and further commodify biological products and processes in every part of the globe – as well as destroy biodiversity, deplete soil and water and displace marginalized farmers.

The report highlights similarities between the current financial and food crises. “Corporate-controlled food systems have resulted in lots of calamities making us sicker, fatter and more vulnerable,” says the report. Ongoing food contamination scandals, the global obesity burden and ocean “dead zones” caused by fertilizer pollution are among the food chain disasters cited in Who Owns Nature? It says that “Unhealthy and hazardous food products are constant reminders of a corporate food chain broken to bits”.

Governments, all over the world, are working hand-in-hand with corporations to deny the root causes of the crises and sidestep structural reforms. “Despite the implications for democracy and human rights, no international body exists to monitor global corporate activity and no UN body has the capacity to monitor and evaluate emerging technologies,” says the report. “The ongoing food emergency and imploding global economy testify to the need for monitoring and oversight of corporations, as well as social control of powerful new technologies.”

Who Owns Nature? reports on frightening trends in corporate concentration and technology convergence, but it also points to a very different reality and a powerful contrast to the corporate-controlled life sciences. Although a single company – Monsanto – accounts for almost one-quarter of proprietary seed sales, about three-quarters of the world’s farmers routinely save seed from their harvest and grow locally-bred varieties. Wal-Mart may be the world’s largest buyer and seller of retail food, but 85% of global food is consumed close to where it is grown – much of it outside the formal market system.

“There is vast and growing resistance to the dislocation and devastation caused by the agro-industrial food system,” the report points out. “In the global struggle for Food Sovereignty, the playing field isn’t level, but the scope of resistance is massive – peasant farmers, fisher people, pastoralists and allied civil society and social movements are fighting for locally controlled and socially just food and health systems.”

Author: Tahir Hasnain is a veteran researcher, writer and development practitioner serving the non-government development sector since two decades. Currently he works for Shirkat Gah as Programme Manager, Environment & Livelihood. He can be contacted at – tahir@khi.sgah.org.pk