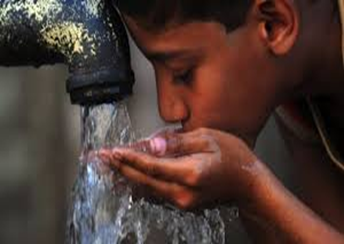 Water borne diseases are any illness caused by drinking water contaminated by human or animal feces, which contain pathogenic micro-organism .Water borne diseases appear to be the common health problem among the sample households in the district Haripur of Pakistan .One of the basic reasons of the spread of the water ‐borne diseases is the combination of drinking water and sewage pipelines. This combination usually occurs due to faulty water supply and sewage pipelines inside and outside the houses in some locations of the Haripur area .Plastic pipes are used for the supply of water which are easily damaged and results in contamination of drinking water .Main water storage tanks supplying drinking water to the community are not regularly monitored and are cleaned after a long time which is therefore deteriorate the quality of drinking water and hence posses a severe health hazard .the problem gets magnified often the community don’t use filter plants in their houses or  don’t use boiled water firstly  because of either  unawareness regarding the benefits of filter water and secondly due to low economic status . Improper solid waste dumping usually results in mixing with drinking water, during the rainy season open solid waste dumping attracts flies and insects .Poor personal hygiene practices also contribute significantly in the spread of water borne diseases .Local community not found to be involved in activities helpful in reducing the factor s that causes water borne diseases such as proper solid waste disposal ,contraction and maintenance of drinking water supply and sanitation system inside their houses and in the community .

Financially the selected community was very poor. Water borne diseases can have a significant impact on the economy, locally as well as (internationally).People that were infected by a water _borne diseases were usually confronted with related costs and seldom with a huge financial burden. Many families were even selling their land to pay for e.g. treatment in a proper hospital .On average, a family spends about 10% of the monthly household’s  per person infected .So it is difficult for lower income group to afford this income loss on cure of waterborne diseases.

Some recommendations are suggested for the reduction of water borne diseases in District Haripur like the cleanliness of water reservoirs/tanks of users must be mandatory. A critical and objective review of existing national research data on the quality of drinking water should b conducted on regular basis. Laboratory is very necessary for testing the water quality .Proper urban planning made new houses with proper management and standard quality of water must be supplied equitably to all consumers at reasonably affordable cost keeping the concerns of equity and equality as prime importance. Cost effective methodology should be designed for monitoring and surveillance of water quality.