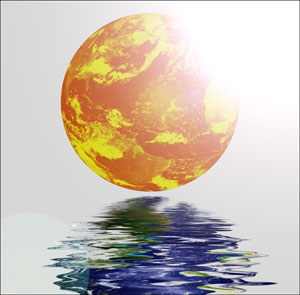 Climate change, is one of the most important and complicated subject for scientists in recent years. For the last twenty years the worlds scientists had debated it “whether it happening or not and also to find out the reasons behind climate change which may be anthropogenic (human made) or natural. But the fourth assessment report of Intergovernmental Panel on Climate Change (IPCC) released in (2007), 2500 world’s leading scientists from more than 130 countries concluded that “most of the observed increase in globally averaged temperatures since the mid-20th century is very likely due to the observed increase in anthropogenic greenhouse gas concentrations”.

Climate change also raised the issues of justice and equity. Richer countries are primarily responsible for the green house gases emissions while poorer and developing countries are mostly bearing heavy cost of  climate change due to their increased “adaptation vulnerability”.

In context of Pakistan this vulnerability is high due to its large population and their large dependence on natural resources. Pakistan is an agrarian economy country, heavily dependent on river’s water and snow melt, the major contributor of rivers in Pakistan. Due to Climate change snow are melting at very faster pace, creating problems in Pakistani rivers. Indus River is severely affected by climate change.

Climate change is also having severe impacts on bio diversity of Pakistan. Blind Indus river dolphin is indigenous to Indus River. Indus dolphin is already jumped into world’s most endangered mammals due to the construction of Pakistan’s  extensive irrigation system on Indus River. Further rise in sea level due to climate change may totally disappear this endangered mammal from this planet earth.

After all these facts about climate change, its damages and predictions of further havoc impacts of climate change on developing countries, Pakistan needs to prepare policies, plans to minimize climate change impacts on Pakistan.