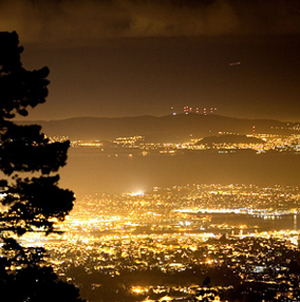 The “light pollution” term denotes the brightening of the night sky caused by the artificial light sources whose light is dispersed into atmosphere . This can have various effects on the growth of cycle of plants, for example, may be influenced by an artificially brightened environment. The sensory organs of nocturnal animals are specially adopted to night time conditions which makes them particularly sensitive to artificial light.  The general term “light pollution” can also refer to light that light is aesthetically disruptive.

The current expansion of human activities near and within natural habitats has brought nocturnal animals in contact with artificial night lighting for the first time in evolutionary history.

Most Amphibians have evolved activities patterns and sensory capabilities that allow forge and interact conditions. Thus, artificial night lighting has the potential disrupt normal activity and behavior of nocturnal amphibians.

Artificial light at night acts as a pollutant, with significant and adverse impacts to ecosystems.

In modern times , light houses and light ships confused birds during their nocturnal migration, sometimes resulting in collision and demise.

Although all light has some effects on the wild life and habitats, certain

spectra are more damaging. Full spectrum light which has blue and ultraviolet wavelengths, should not be used. Even though such light allow people to see colors at night, the presence of blue light sends an environmental signal that it is day time.Ultraviolet light is highly attractive to insects and it should be avoided as well. In laboratory, some migratory birds were unable to orient under red lights.

Not every light  needs to be on from dusk to dawn.

Lighting can be minimized by setting the fixture to turn off after a certain hour (The Dutch government does this with some of its street lights), or by putting the light on a motion sensor so that it is only when needed. Good practices such as turning lights out when they are not needed could go a long way to minimizing light pollution on private property, not to mention the benefits of reducing pollution from energy production and saving money.

View all posts by Saba Rafaqat →