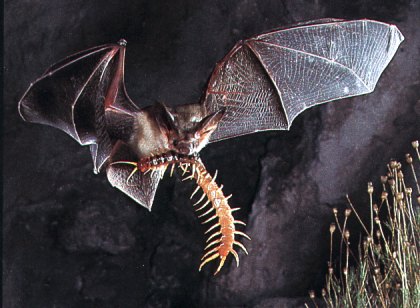 Bats are some of the most fascinating mammals of Pakistan. Bats comprise almost one-fourth of all mammals–nearly 1,000 species–yet they have not received the attention and credit they deserve as major insect-controllers and pollinators in ecosystems worldwide. Fruit and nectar feeding bats play an Pivotal role in the ecology of Pakistan, sharing the role of seed dispersal and pollination with birds and insects.

By visiting flowers in search of nectar, the bats pick up and deposit pollen from flower to flower, pollinating them and allowing viable seeds and fruits to grow. In addition, fruit bats disperse the seeds of fruits, either by carrying off the fruit to eat it or depositing seeds in their droppings as they fly. Because fruit bats can fly long distances, they are able to move between flowering trees which are widely separated, helping maintain forest diversity and regenerate forests at a landscape scale. Bats are well-equipped to disperse tree seeds far and wide through a forest (Allen, 1996).

The flowers that are visited by bats are typically open at night, Large in size (1- 3.5 inches), Pale or white in color, Very fragrant – fermenting or fruit-like odor, Copious dilutes nectar. Bats play key ecological roles as primary predators and are by far the most important natural controllers of night-flying insects. While many of the insects consumed are serious crop pests, other insects are responsible for spreading disease to humans and livestock. A single bat can eat thousands of insects each night (ranging from 1,000 to 3,000), and may consume up to 50% their own body weight in insects in a single evening (Australian Nature Conservation Agency). As an illustration, a little brown bat, one of North America’s most abundant species, is capable of capturing 600 mosquitoes in just one hour.
By controlling huge numbers of night-flying insects, bats unequivocally form an integral link in ensuring environmental health. When bat populations are destroyed, insect pests, unchecked by their natural predators, multiply at an alarming rate. The loss of insectivorous bats leaves humans increasingly dependent on pesticides, which already threaten our environmental and personal health.

Unfortunately their numbers are declining in Pakistan. Loss of habitat and a decline in food availability are probably the principle causes of their decreasing numbers, due to the effects of human activity. The felling of old trees, deforestation, due to electricity shocks, insect control, and environmental contamination with toxic pesticides, the in-filling of cavities in buildings and the stopping-up of caves and mine shafts have drastically reduced the availability of roosting sites for bats.

Food shortage is a problem too, partly due to the widespread use of pesticides, which kill off many of the insects that form the bats’ diet, and also the destruction of insect habitat. The ecological consequences of the continuing decline of bat species are unknown. However, even our limited understanding of these animals suggests that the outcome will not be favorable to natural ecosystems or to the needs of humans.

This article is written by “Bilal” Guest Authot At Envirocivil.com