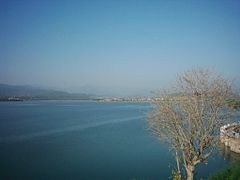 The new oil, water, fortunately a renewable resource is long used in a wasteful manner. However now it is growing expensive and soon to be overwhelmed by insatiable demand. As it is, wars are about to break out between countries, the disputes being dams and rivers. Aquifers are falling, glaciers vanishing, reservoirs drying up and rivers no longer flowing to the sea. Climate change threatens to make the problems worse. All humans need a basic minimum of two liters of water in food or drink each day, and for this there is no substitute.

The language is often overblown but the basic message is not wrong. Water is indeed scarce in many places, and will grow scarcer. Water shortage might become the crises of century. Bringing supply and demand into equilibrium will be painful, and political disputes may increase in number and intensify in their capacity to cause trouble.

Rawal lake is not just a picnic spot picnic but it also serves very important purpose of being a main source of drinking water for the citizens of Rawalpindi and Islamabad.  In spite of the fact that many initiatives have been taken by government to fulfill its responsibilities of providing clean drinking water the ever increasing demand of water along with increased anthropogenic activities around the sources of water are becoming real challenges for the government. To carry on with present practices would indeed be to invite disaster.

For provision of safe drinking water where the source is surface water four steps are very important. First is the protection and management of catchment area so that quality of source can be maintained not only for water supply but also for various ecological and environmental reasons. Second is the filtration for removal of contaminants and particulates from water. The third step is disinfection for killing the microorganisms while the fourth is safe distribution of treated water through pipes into the taps of consumers.

The water quality at source is very important in increasing the efficiency of filtration plant, reducing the cost of cleaning the water, aquatic biodiversity and ecosystem health.  It is observed that areas around Rawal Lake such as diplomatic enclave, Quaid-e-Azam University, Bari Imam, Phir Suhawa and around 100 poultry farms release their discharges in to the lake. The NEQs like BOD, COD, and Turbidity are found to be exceeding the permission able limits. According to the PEPA 1997 section 11 “no person shall discharge or emit or allow the discharge or emission of any effluent or waste or air pollutant or noise in an amount, concentration or level which is in excess of the National Environmental Quality Standards or,….” . According to the Act it is the responsibility of federal agency i-e Environmental Protection Agency to implement the provisions of the Act. All necessary actions for complete implementation of the law need to be taken by Pak-EPA. To ensure enforcement of the National Environmental Quality Standards Pak-EPA has been given power to issue notices and taken necessary actions. It is now raising concern of people that if such a comprehensive law, with penalties and provision of power to take actions has been provided to Pak-EPA then what is causing the immense pollution of water bodies? The land use of catchment area, the ownership rights, and lack of coordination among main departments such as irrigation department Punjab, CDA and Pak-EPA could be some of the reasons. May be another ordinance is required which should abandon the discharge of effluents in the lake, restrict the land use and should allow the affected to charge the effectors and should also address the ownership problems.

The main purpose of screening process is to remove large particles in the form of branches of trees, leaves, clothes, plastic bags and dead animals. Aeration is carried out in order to remove taste and odor problems from the incoming raw water, the DO level of water is enhanced by this process. During coagulation an appropriate coagulant like alum is added and rapidly mixed with water to remove suspended particles in the form of turbidity. In this process the large flocs are removed from the water by the process of gravity settling. In filtration process the supernatant water after the process of sedimentation is passed through a 1.4 meter column of silica sand having an effective size of 0.95mm (± 10 %) with a filtration rate of 5.4 m/hr. Problems such as presence of bacteria fungi in drinking water and unacceptable taste or odor may arise as a result of inefficient working of filtration plant. The load on filter plant doubles if raw water coming from source is highly contaminated. It not only results in high load on filtration media but also doubles the treatment costs.

Liquid chlorine is used for killing virus bacteria and protozoa in water and the dosage rate varies from 1.5 to 2.0 mg chlorine per liter of water depending upon the level of contamination, pH, and temperature, ensuring the residual chlorine upto 0.3-0.5 mg/l. Lime Dosing is the last unit process being applied at Rawal Lake water Filtration Plant. In this process lime is used to adjust the pH of water. Chlorine is a dangerous chemical because it irritates the respiratory system and eyes. It can also form Trihalomethanes (THMs), which are possible carcinogens. However this requires a long term exposure of 60-70 yrs with 2 liters/day.

THM are mainly formed as a result of interaction of chlorine with organic material in water. Treatment methods include prevention of THM formation, removal of THM from treated water, or removal of THM precursors (organic substances) before chlorine is added to the water.  The prevention involves using a disinfectant other than chlorine to treat water.  If the equipment for other types of treatment is not already available at the treatment plant, then using an alternative disinfectant is usually the most economical option for THM control.

Other disinfectant chemicals are ozone gas (O3) and ultraviolet light (UV). However they are not used because they are more expensive than chlorine and can’t maintain a residual concentration.

It is time to pay attention and take some actions to restore the water quality of Rawal Lake. Since Pakistan is striving to achieve the MDG and biodiversity 2020 targets the Rawal Lake is an important reservoir to work on. It seems that the sustainability of this important reservoir has already been exceeded due to insufficient investment and inadequate measures. Improvement in quality of water at source will reduce pressure on aquatic life while upgrading the filtration plant will bring improvement in lives of people depending on Rawal Lake water as a source of drinking water.

View all posts by Harmain Rukh →

One Comment on “Protection and Sustainable Use of Drinking Water Source, The Rawal Lake”