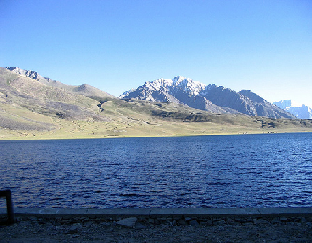 Shandur Lake is formed at an elevation of 3,738 m with rock-strewn mountains of Hindukush on the eastern and western side. It lies at 36º 11′ latitude and 72º 46′ longitude on the world’s atlas in Ghizer district, Northern areas of Pakistan. The lake covers an area of 1 square mile (2.6km²) which is sourced by various streams generating from snow melts, springs and occasional rainfall. Lake in 1993 was pronounced as the national park, and the Shandur pass extending near 644 km² invites a large crowd to the annual game of polo.

The climate remains dry mostly and the rainfall begins generally between March and May, the winters are severe and long, extending form September to April, snowfall appears in December and February. Shandur Lake falls under the mountain desert ecosystem where the average rainfall seldom goes over 150 mm.

The land mainly a pasture; provides grazing cover for the locals’ cattle and for cultivating particular crops like wheat, maize and potatoes. Lake water is channeled to lands for moistening at lower elevations than the lake itself.

The 3 villages around the lake are namely; Barsat, Surlaspur and Terru,

Poverty ratio: major of the population is very poor.

The natural forest is of Juniper (Juniperus excellsa), Birch (Betula utilis), and Willow (Salix spp ) are chopped for the consumption in heating and stoves, and is mainly surrounded by pastureland formed by various kinds of grasses, herbs shrubs and bushes.

Shandur is without any fish in its waters, yet again the experts’ view for this lake as well is that Brown (Salmo trutta fario) or the Rainbow trout (Oncorhynchus mykiss) can be raised here. 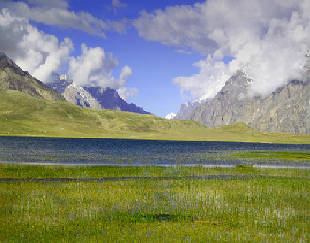 The animals sighted during the survey were 5 species, the visibly noticed species were the; Weasel (Mustela altacia) and Stoat (Mustela erminea), where as the Snow leopards (Uncia uncia) presence in the area was figured out by various physical evidences, where this creature is Red-Listed endangered provided by the IUCN. Also in the Red-List is the threatened Lynx (Felis lynx) and Stone marten (Martes foina) are known to struggle for their existence here.

The villagers are chief drawing processes of natural resources here. Area being deficient in any facility of fuel gas supply has cost to an overall want of forest tree wood from the plantation in the private possessions, and use of cow manure as fuel for stoves, pastures for foraging cattle and land for agriculture.

The government is responsible for the management and protection of these resources, although with check and measures the population increase has distorted the look, of high yields to meet the ever increasing demand. 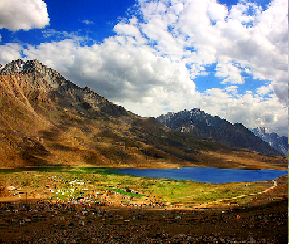 The escalating apparent and acknowledged strains to Lake Shandur are; mass tourism as an external factor threatening the area at large scale, which goes without any administration, care or concern to manage the solid waste, water pollution of this wetland and foreign population entry to such a fragile ecosystem, over grazing on grassland pastures, leaving severely grazed land open to deterioration.