Saif ul Malook is a large reservior located at coordinates 34° 52′ 37.34″ N and 73° 41′ 37.71″ E in district Manshera, Kyber Pukhtoon Khwa. It lies at an altitude of 3,224 m (10,578 feet). The lake is spread over an area of 12,026 acres (48.7 km²). The sink is sourced by various springs, streams and annual rainfall, while the mount Malika Parbat snow melts is its biggest supplier. The climate is primarily dry where rainy season is mainly between March and May, snowfalls between December and February. Hottest month usually is August, with calculated average temperature of 12.2°C. January usually is the coldest of month in a year, temperatures falls below freezing i.e. to -6.9°C. Five months (December to April) remain below 0°C. The average rainfall received is more than 150 mm. The land foremost is made available for growing of crops and vegetables, provides food for livestock, woody plant species are a good source of fuel wood and construction of house thatch. Dry branches and stems of Common juniper (Juniperus communis) and Willow (Salix. sp) are collected for fire wood. Several herbs with medicinal properties are extracted by the village locals in large quantity The 2 main villages chosen are; Delsehri and Langrah with population of 1,560 people and 2,700 people likewise. The mass population is underprivileged, i.e. poor = 48%, middle=50% and rich are 2%. The people are employed as daily wages labourers in business and tourism. Farming crops, cattle rearing and herding, employed in government departments and as proprietors loaning to tenants for agriculture puposes. Main laguages spoken are Hindko, Pashtoo, Gojree and Urdu. 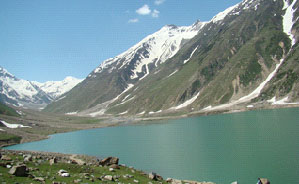 Sub-Alpine mountainous ecosystem includes pastures with growth of curative plants, wildlife, glaciers and countryside view. Lake Saif-ul-Malook, is shaped by a fusion of cover of grasses, grass-like plants, herbs and shrubs. This vegetation along the hills and around the lake provides an excellent habitat for rich flora and fauna. Species well represented in the sub-alpine are; blue pine, fir and birch among trees; and Junipers, Rosa, Berberis, Willow (Salix) and Cotoneaster among shrubs. Many grasses, grass-like forbs and other plants are also found. Common Juniper (Juniperus communis) patches are found all over the pastureland on rocky ridges. Willow (Salix) occupies depressions on cooler aspects. Buck wheat (Polygonum) are usually visible in the pasture. Iris form more or less compact patches distributed all over the area, giving the impression of pure stands. Butter cup (Potentilla) and the Astragalus herb vegetation is intertwined. The region provides grounds for resting/breeding of avian fauna; 51 species have been sighted and White wagtail (Motacilla alba personata), Yellow wagtail (Motacilla flava), Black red-start (Phoenicurus ochruros), Plain mountain finch (Leucosticte nemoricola) were the most commonly observed bird species. Predatory birds were presented by Black kite (Milvus migrans) and Common kestrel (Falco tinnunculus). The statistics of species scarcely in attendance are; Green necked bunting (Emberiza buchanani), Rufus-tailed rock thrush (Monticola saxatilis) and White throat dipper (Cinclus cinclus). The Lake Saif Ul Maluk and its tributaries have five fish species in all and only two of them have the economic importance. The economically viable species are the Brown Trout (Salmo trutta fario) and  Schizothorax plagiostomus where as the other three species are the Glyptosternum reticulatum Triplophysa kashmirensis, Schistura alepidota.

Resources from the nature to a large extent are used by the people living in the neighboring environment. Lake is exploited as a grazing land and for plant cropping;deficient gas service leads to in general dependence on forest wood and use of cow manure/peat as fuel to inferno stoves.

The management and protection of these resources comes under the care of government department of forest and wildlife, although with petite check and measures, with the ever ascending population demands there is a visible destructive affect on the forest tree covers. At Lake Saif-ul-Malook tourism continues to inflate, hastening degradation of the environment by disposing of solid waste which lodges enormous strain on the delicate mountain ecology; noise/air/water pollution, inescapable human commotion and transport incursion to this area.

View all posts by Sher Shah →