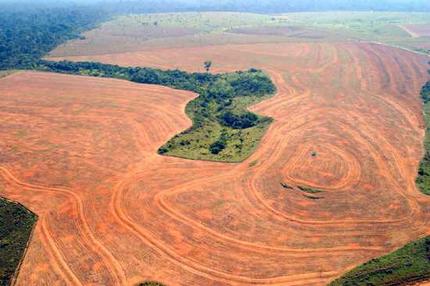 Deforestation means large scale cutting of forests. The forest lands are converted in to farms, ranches and urban areas through deforestation. Another cause behind deforestation is the cutting of trees for timber and fuel. Deforestation has also been used in war situations to deprive an enemy of cover for its forces and other vital resources. It essentially leads to extinction of vital things and destroys the ecological balance of nature. Thus causing:-

Heavy Soil Erosion – The roots of the trees hold the soil firmly keeping it intact. With large scale deforestation soil erosion and landslides have become a normal phenomenon. During heavy rains and typhoons soil is washed away to lower regions. This increases the risk for landslides which can cause seriously threaten the safety of the people and damage their properties.

Global warming – The trees absorb the harmful carbon dioxide and release the life sustaining oxygen, thus acting as natural friends of humans. Deforestation increases the amount of carbon dioxide in the atmosphere leading to global warming due to green house effect.

Flooding – Trees absorb water in large quantities during heavy rains. But due to large scale deforestation there are very less tress to retain water. This again leads to heavy floods causing heavy loss of life and property.

Desertification – Deforestation is one of the causes behind the conversion of many fertile tracts of land to deserts. This phenomenon is known as desertification. When mountain forest faces desertion, watersheds are degraded and this leads to the loss of sustained water supplies for lowland communities.

You May Also Like: Deforestation: A major cause for climate change

Keeping these dire consequences in mind, an honest effort should be made by the human civilization to conserve forests.

4 Comments on “Harmful Effects Of Deforestation”