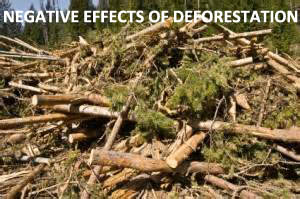 The way everything works on earth tells one extremely important things and that is ‘keeping the balance’. Forests are one of the major things that can have a significant impact on our environment. While deforestation has made it easier for people, especially for developing countries to build communities and use the method to move towards development, collectively it has far more negative effects on our environment and thus our lives. This article would discuss some of the major negative effects of deforestation to let you know how ‘harmful’ it can get.

According to study around seventy percent of the world’s animals and plants live in forests and due to deforestation they are quickly losing their habitats and loss of their habitats can even lead to their extinction as well. In, other words deforestation can cause biodiversity to fade away and this is not it. It also effects negatively any medicinal research and/or use natural herbs and other extracts that are used for new drugs like taxol. Moreover, any local community living there also depends a lot upon the forests’ animals (hunting) and plants (medicinal use) will suffer pretty badly due to deforestation.

Most of us are well-aware how adversely greenhouse gases can affect our environment but that still doesn’t stop many people, corporations and/or governments from deforestation. Forests and trees to be specific are a great natural source of absorbing such harmful greenhouse gas and any carbon emissions that result of humans’ progress. These gases contribute a lot to the global warming around the world and shouldn’t be ignored. So, without trees things can get really bad and ironically, the same trees when cut down, removed or burned become a source of carbon emissions themselves. According to the WWF, “Tropical forests are capable of holding around 210 gigatons of carbon and their deforestation represents about 15% of greenhouse gas emissions”.

Trees play a crucial role in the overall water cycle by holding the water in their roots and then later releasing it in the atmosphere. In Amazon alone, more than half the amount of water in the ecosystem is held by the plants. This means that without the trees our climate would become drier and much hotter.

As we already know how effective trees are when it comes to absorbing water and holding them within their roots. This keeps the watersheds from different streams, rivers and other sources to a manageable level. But, with deforestation there wouldn’t be any trees to absorb and withhold the water. Moreover, the forests also serve as a cover for against soil erosion. Deforestation would cause downstream flooding which has already resulted in some major disasters in different parts of the world.

These are some of the major negative effects of deforestation on our environment that should not be ignored because deforestation is creating different natural time-bombs waiting to explode – we should stop pushing for deforestation before it’s too late.

What do you think should be done to stop deforestation? Let us know in the comments below.