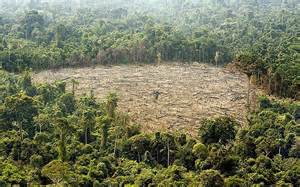 Effects of Deforestation in Brazil

Deforestation leads to loss of biodiversity because a large number of animals that live in forest lose their habitat. It can also lead to extinction of certain animals as it happened in the past. Since deforestation in Brazil has happened quite rapidly and that too at a large scale that man plants that were used for medicinal purposes are not found any more is most of the places. Deforestation has effected biodiversity in Brazil quite adversely.

Once a forest has been cleared off the trees, it just becomes another plain ground. When rain pours down on the soil, it washes away all the nutrients in the soil. This makes the soil less fertile and unsuitable even for any agricultural uses. Such plains can then only be used for construction of roads and buildings to settle new communities because for other uses the land becomes less productive or pretty much unusable.

Due to excessive deforestation and rainfalls in Brazil the chances of soil erosion are quite high. Since there are no more trees to cover the ground, there will be nothing to hold the water as trees absorb the water and hold it with in them. As a result most of the soil washes away.

In many forests of Brazil and around forest, there used to live different small to big tribes that were settled their due to trees and formed their communities. Forests are useful to these tribes for hunting as well as getting any medicinal herbs. However, once the process of deforestation began in large parts of Brazil, many local tribes reduced in numbers as they were affected due to deforestation.

Deforestation in Brazil severely affected the water and carbon cycle as well. As you might already know, trees absorb most of the carbon and greenhouse gases in the air while giving out oxygen. However, when trees are removed, cut down or burned there is nothing to absorb the excessive amount of carbon emissions that produced due to human civilization and that’s not it – the removal of trees also releases more carbon in the air. Thus contributing greatly towards global warming.

These are few among many other negative effects of deforestation. Although with deforestation Brazil moved towards industrialization and advancement, the negative effects far outweigh the positive ones. It’s high time that Brazil and other countries that were/are active in deforestation to think about its hazardous consequences and stop this practice once and for all.