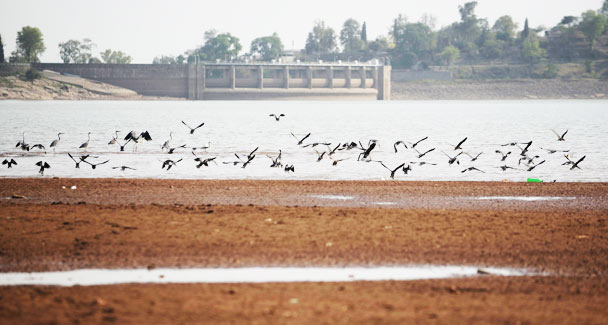 Rawalpindi has only one biggest resource of water that’s Rawal Dam. Rawal Dam was constructed on river Korang in 1965 to fulfill the water need of people living in Rawalpindi and area of cantonment. It has capacity to store water from 37 thousand to 47 thousand acre feet. It is managed by department of water under government of Punjab.

Many years ago water of rawal dam was clear and crystal but now it is the one of the biggest cause of water born diseases like cholera, hepatitis etc. In 1960, the population near dam was less and water was purified by natural process as the consuming of water was very less. As, the population increase from 1980, it effected this natural purification phenomena. Now the population around Rawal Dam is more than two lakhs and most of the people living near dam throw garbage into lake.

Because of these pollutants and contamination, the color of water is not only changing but also its beauty is destroyed and it is covered with algae and fungi because lake has very high amount of nitrogen, nitrates and phosphorus. These help algae growth in lakes and kills natural fauna and flora.

According to the official at the CDA, If you dip a 250 ml polythene glass into the lake you will extract 475 coliform per ml in it (coliform are bacteria present in human feces). These bacteria are enough to put a person in hospital. Beside these bacteria, scabies mities are also found in water of Rawal Lake after testing the water.

The situation of Rawal Lake is very bad. People that are using water of Rawal Lake have high risk to get diseases. By keeping view in the feasibility of installing four treatment plants at bari imam and bhara kahu , the capital development authority prepared a report. According to this report he Rawal Lake is receiving waste water from a catchment area spread across 70,000 acres and included both Islamabad Capital Territory and non-Islamabad Capital Territory. 65 % of waste is coming from direct Islamabad capital territory including Bari Imam and Bhara Kahu, primarily from houses in Dhoke Chobhun, Simli Road and Madina Town.

In august 2010, the supreme court of Pakistan in a sou moutu case regarding contamination of Rawal Dam asked Pakistan Environmental Protection Agency to see If capital development authority is taking prompt action against the discharge of sewerage from poultry farms to the lake. As the time passes, this work is done only in papers and nobody took action.

In 2013 the case again opened and in Supreme Court of Pakistan a special cabinet was made. It was headed by Chief Justice Iftikhar Muhammad Chaudhary. Special Secretary Cabinet Division Mushahidullah Baig gave written guarantee that no refuse is being dumped in Rawal Lake.

According to the my opinion, there is only one way that water should be filtered with the help of UV water filtration method and by maintaining EPA law.

View all posts by Aisha naz →