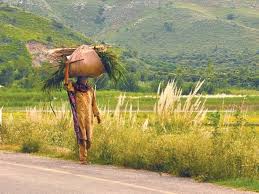 Women experience physical or sexual violence in their lifetime and they suffer severe physical and emotional pain due to the violence and abuse. The society must do more to empower women and ensure their safety.

The world is celebrating these days the 16 Days of Activism Against Gender Violence and calling for greater gender equality. The 16 Days of Activism is an international campaign that starts on 25 November, International Day for the Elimination of Violence against Women and ends on 10 December, Human Rights Day. Actions are taken by the civil society across the world to raise awareness about gender-based violence as a human rights issue at the local, national, regional and international level.

Violence against women is a common phenomenon in Pakistan which affects women from all kinds of backgrounds every day. According to the 2012 report of the Human Rights Commission of Pakistan, Pakistan is the world’s third-most dangerous country for women as 90pc women face domestic violence. Many women face violence on a daily basis and this reflects the miserable condition.

Women are the front line victim of the climate crisis. Women in rural Pakistan spend most of their time in doing agricultural activities and collecting water and fuel for their families. Changing weather patterns are constantly affecting agriculture and the natural resources including forests and water. As a consequence of these changes, workload and hardships of women has increased manifold. Women now travel farther and face more risk of attack.

Also Read : Climate Change in 2013: 5 Things to Expect This Year

Women currently have less socialization due to increased work hours and economic pressures. Emotional well being of women has also reduced with increased level of stress, anxiety and frustration. As a result, family disputes have also increased and women always argue financial problems with men and in return, the frustrated men tend to show anger and use violence against women. These disputes have also given rise to escalating divorces and court cases.

Higher temperatures are linked to increased tensions. Escalating temperatures and economic pressures have encouraged domination of men over women besides frequent incidents of violence against women (physical assault) and undue social restrictions. The climate change impact on women is well demonstrated in below mentioned figure. 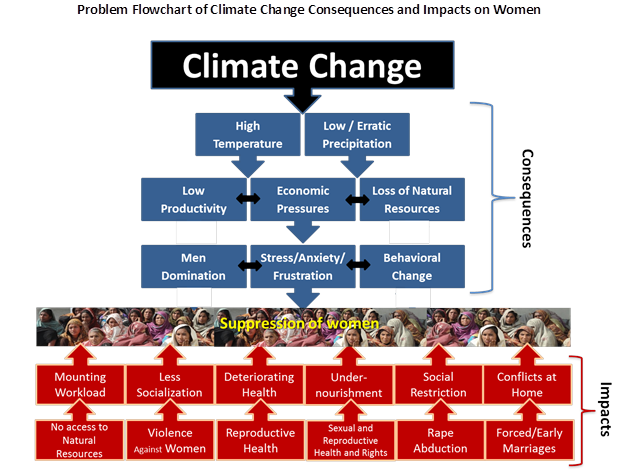 Climate change is impacting negatively on agriculture and fishing activity. Due to mounting economic pressures and growing poverty, women currently face marriage problems as well. Currently, most of the marriages in poor rural communities happened to be forced marriages. Families and the bride herself cannot choose and they have no other option but to accept and compromise completely. Escalating cases of early age marriages have also profound link with poverty.

Pakistan is confronting with climate induced natural disasters such as earthquakes, floods, windstorms, droughts and cyclones since last many years. Recently, the incidents of flood disaster have increased and flood-prone communities have suffered mass internal displacement. In this regards, women suffer more problems due to their isolation from other family members. These disasters make women vulnerable to violence. A number of cases of sexual violence and abduction were reported during earthquake in 2005 and flood disaster in 2010. According to a recent report from the UN Environment Programme, rape victims and human trafficking in women and children rise steeply during disasters like floods, storms and cyclones.

Climate change is thus a serious threat and women’s concerns have to be recognized and integrated in climate change and disaster risk management policies to make them comprehensive. It is now established that Climate challenge is huge and multidimensional that demands unity, collective actions and solidarity with each other to deal with this great challenge.

In view of the useful knowledge and experiences that women possess, they should be effectively used to mitigate climate change as well as developing strategies to cope and adapt. Capacity building and empowerment of women are thus key areas to address while addressing climate change and its impacts on women.

Author: Tahir Hasnain is a veteran researcher, writer and development practitioner serving the non-government development sector consistently from two decades. He currently works with Shirkat Gah as Programme Manager, Environment & Livelihood. He can be contacted at – tahir.hasnain@yahoo.com

One Comment on “Climate Change is Supplementing Violence against Women”