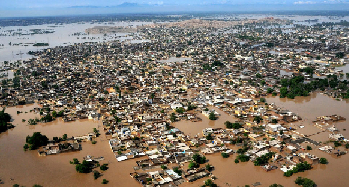 Forces of nature have mostly been hostile to human existences. History shows man’s struggle against these forces. Floods are the major factor that is responsible for bringing drastic change on the surface of the earth.The situation in Pakistan has worsened due to Flood on 29th July 2010. The recent floods in Pakistan have devastated the Southeast nation more than ever before in its 63 year history. The effect of this disaster will naturally be complex, tremendous worse and immense. An estimated 20M of Pakistan’s 175million population have been affected by the flood. In the Northern Province Khyber Pakhtunkhwa, large-scale flash floods destroyed thousands of homes and infrastructural elements in a matter of hours. Floods have been recognized as a major natural calamity. Floods in Pakistan are mainly caused by heavy concentrated rainfall in the catchments during the summer monsoon season (July to September). Flash floods triggered by torrential rain have killed hundreds of people all over the province of KPK. , submerging many villages and hundreds of houses, causing extensive damage to precious lives and property. Roadside kiosks and shops were submerged, and water lapped at the walls of buildings. Many of the industrial units have been shut down and schools and colleges temporarily closed. Also Road traffic remained suspended. Pakistan is experienced the worst floods in their history, 650,000 homes have been destroyed, at least 500,000 people have evacuated, damage to the highways is expected to be in the $60 million dollar range, Damage done to the power system and dams is expected to be in the $30 million dollar range.”

‛Pakistan’s National Disaster Management Authority (NDMA) says that when this is all said and done, they expect that this will be considered the worst disaster the country has ever experienced. The current estimated death toll is approximately 1600 people, Nearly 1.5 million acres of crops have flooded, Over 10,000 cattle have died, Many of the industrial units have been shut down, Road traffic remained suspended.”

‛The deaths mainly occurred due to collapsing of roofs as a number of villages were inundated and fields damaged when floods hit the above areas. A wide area came under water as floods made their way in Mardan and Swabi where 40,000 houses have collapsed. Thousands of people are trapped in the flood-hit areas. Ismailia, Kalu Khan, Khat Kalay, Sheraghand and Nazar Kalay areas of Swabi are worst hit. Fields of corn, rice, sugar cane and tobacco have also been damaged in Swabi and Mardan. The heavy floods have also swept away Kalu Khan bridgein Swabi while the communication network has been severely damaged.

The damages to the other infrastructure in the province are given in which highlights that over all 544 villages were effected where in the households were approximately 5,46,003. Total houses affected were 191215. In other infrastructure damaged due to flood are 283 roads, 278 bridges, 23 culverts, 885 education facilities, and 178 Government buildings were also destroyed, only 50 % roads could be partially opened for light traffic only.

The flood caused adverse effects on various crops in the province; especially the standing crop of the sugarcane was severely damaged. The flood also brought tremendous amount of sediments and spread thick blanket of sediments in the plane areas of Charsada & Nowshera. The debris blanket of 2-12 feet thick destroyed the water irrigation system. The hazards associated with these sediments are prominent in the districts of Charsada & Nowshera. The removal of debris and rehabilitation of irrigation water supply system is an important task. Government of Pakistan along with the active support of international and national humanitarian organizations is supporting flood affected population by providing shelter, food, medical care, education, sanitation etc.

The destructive floods of 2010 in Pakistan are predominantly caused by the effects of prolonged monsoon rainfalls. The hazards caused by these floods are tremendously increased due to large scale construction and blockage of the river’s regimes.

The role of big reservoirs in controlling and regulating floods, such as Tarbela Dam reservoir is ended due to loss of their storage capacity. Hence, immediately new medium and large storage reservoirs are required to be constructed to manage future flooding in Pakistan.

However, for the purpose of rebuilding  and reconstructing the damaged areas, Khyber Pakhtunkhwa received $25 million assistance from United States Agency for International Development for reconstruction of damaged school buildings in its flood and militancy affected areas. The provincial government and USAID signed an ‘activity agreement’,  on the basis of which school buildings damaged by floods and militants in areas would be reconstructed. In this regard the elementary and secondary education department and Provincial Disaster Management Authority (PDMA) will work together to assess the damaged schools that are to be reconstructed in the flood and militancy affected parts of the province. More than 11,000 schools were damaged in Khyber Pakhtunkhwa as a result of the 2010 devastating flood, rendering a large number of students without education facilities. While a large number of the partially damaged schools are being reconstructed with funds provided by UK’s Department for International Development, bilateral donors, including UAE and Qatar, have also extended financial assistance for reconstructing school buildings, roads, and other infrastructure in KPK.

One Comment on “Ecological damages of 2010 Flood in Pakistan”