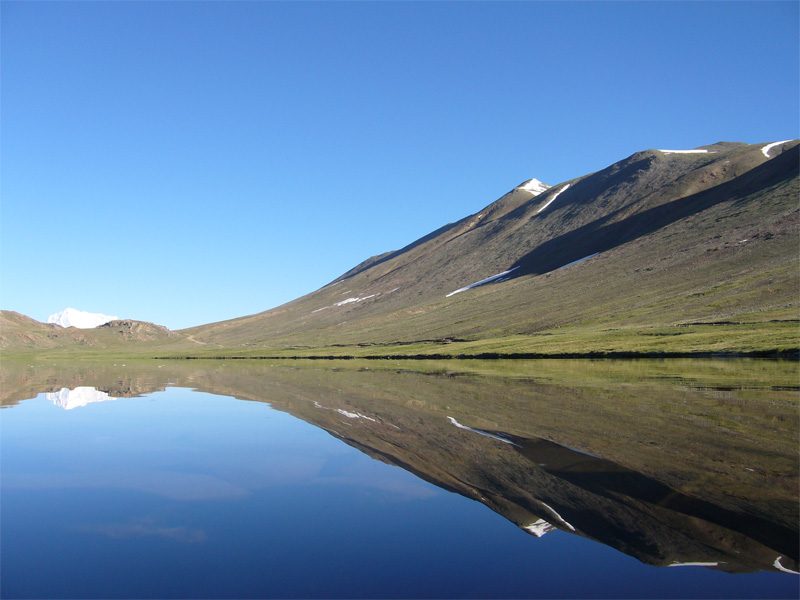 The Sheosar Lake is situated in Deosai Plains at coordinates 34, 99° N and 75, 24° E between the district of Astore and Skardu in the Gilgit-Baltistan (GB) of Pakistan.  It is a fresh water lake constantly  sourced by glacial defrost, streams and spring waters, situated at an altitude of 4,153 m to 4,162 m covering an area of 131.19 ha (1.31 km²). The Sheosar is owned by the state and is under the Forest Lake Management of Deosai National Park in N.A. The lake in native language, Shina is called “Blind Lake”. It measures to be 1.4 miles (2.3 km) in length and 1.2 miles (1.8Km) across wide, average depth of lake measuring to be 40m (131 feet).

The climate is very intense, strong solar radiation received at high altitudes creates desert and dry region where as the winters brings in heavy snowfall, with freezing temperatures lasting for about 5-6 months in a year. Summers are mild and pleasant but very short. Daily temperatures vary from -20ºC to 12ºC; annual precipitation gauged is between 510mm to 750mm.

The land is used for agriculture and farming and also for provision of fodder for the domesticated cattle. The waters are used for dampening the farms soil, drinking and also in sanitation use and domestic purposes. The forest wood is used as burning fuel in daily use.

The 2 villages near the Sheosar are; Sher-Qulli and Satpara. Each one has a different dependence on the lakes resource of water and forest.

Language: commonly spoken in the two villages is Shina.

It is a meadow with rising and falling cover of wild grasses, herbs and plants. There is no tree and shrub cover as snow covers the area most of the year. Sheosar provides a great place for rest and grounds for migratory as well as the resident avian species.

Sheosar Lake and its surrounding area mass some 342 species of vegetation. A number of aquatic plants are present in the ephemeral small ponds such as Mare’s tail (Hippuris vulgaris), Fennel pond weed (Potamogeton pectinatus), and Pnodosus spp.

Given that it lies above the tree-line, and ground cover is sparse in many areas, it has the appearance of a high, cold desert in many regions. Some species such as Sorosaris dysaie, Saussuria gnaphalodes, Saxifraga jacquemontiana, Aster flaccida, Rhodiola wallichiana, and Primula macrophylla, not only are able to colonize in this habitat, but flourish greatly.

Snow trout and Brown Trout are the two major types of fish species found in the Sheosar. The Lake has both the endemic as well as exotic fish species.  The endemic or indigenous species include; Snow trout (Schizothorax plgiostomus) and Tibetan/High altitude loach (Triplophysa stoliczkae) while the exotic species found in the Lake is Brown trout (Salmo trutta fario).

Sheosar has 3 species of large mammals existing in its location; Himalayan brown bear (Ursus arctos) of the given status as critically endangered has been known to survive here with aide of human efforts. Weasel (Mustela altacia) and Stoat (Mustela erminea) are seen despite the fact that information on their population statistics is barely studied.

The real players at this location are;

4.1 The local Villagers and Community

The villagers’ draw most  from here; area being under provided in fuel gas supply leads to an overall reliance on the forest tree wood, use of cow manure/peat/shrub as fuel to  light stoves is carried out, pastures are  subjugated to grazing of cattle and agriculture.

The government stands accountable for the management and protection of these resources; the locals are given concessions, although it lacks strict check and measures, the demands by populations increase has worsened the picture of withdrawing high yields unlawfully.

The business of tourism continues to swell, degrading the surroundings by discarding waste which puts enormous pressure on the delicate mountain environment; pollution, disturbance, and transport influx, vacationers’ use of vehicles off the track on the pastures is ruining the location.

Mass tourism is major issue threatening Sheosar Lake to a great extent, with no genuine management; these anthropogenic activities are distorting the original scenic landscape; solid waste disposed, and pollution of waters of this wetland and entry of foreign population into this fragile ecosystem, over grazing in grassland pastures remain open, to further wear and tear down.

This Article is Written by “Zahor Ul Haq” Author At Envirocivil.com