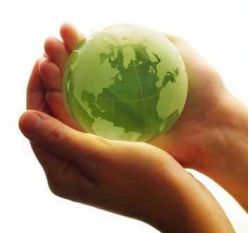 Why should we protect environment?

The human race has transformed and is continuing to transform the earth drastically in his pursuit of development. Man, in his search out for comfort and luxury, has explored and destroyed the equilibrium of the nature and ecosystem.

The Ocean is swallowing the land as a result of global warming and the IceMountains keep on melting down. The sea level has rose up to 8 inches in the last century and is expected to rise up to 36 inches in this century. If it happens, the next generation will witness a major part of land being taken by the sea, and as a result, they may be forced to leave their shelters and sleep in the streets. Then we will only be responsible for that.

Let us don’t believe the forecast and predictions. But still we cannot close our eyes in front of reality. What all we have witnessed so far? The rivers and wells had dried out; the forests were transformed into cities and concrete forests; temperature and humidity are on the rise day by day.

Is development a common phenomenon in man’s progress? If so, how can it be an injustice or a crime? Yes, a good question. Here is the answer. Look at the nature. All the living beings in the earth are living in harmony with nature. But only man, who is believed to the protector of the earth, is doing the extreme opposite.

Better late than never, now we need to change, at least a little by not doing anymore harm to the nature. There are some positives signs as the expansion of ozone hole have almost stopped over the last two years. We can get charged from this positive energy and we must change. It doesn’t mean no development. We need development for sure, but it should be scientific, realistic and it should protect the nature as well. This is a view which should be re-written with changing circumstances, but only in a positive manner.

What is the remedy?

Ecosystem, once destroyed, cannot be retrieved. But development on the other hand can be done today or tomorrow and also can take some deviations as well. Human existence is purely based on the environment. So development should have some border line so as to protect the nature from being over-exploited.

We have to perform our responsibilities to protect the nature and natural resources. There are some little things illustrated below which we can do without any expense whatsoever.

2. Do not waste water –   Never leave taps open while brushing or washing dishes

4. Don’t prints if not required, also use both sides of the Paper

5. Don’t waste food – Don’t cook extra food and throw, always keep in mind that there are million in the world starving without food.

6. Dispose the garbage properly; don’t throw it on the street.

All these things will only save your money. Like this there are a lot of possibilities in every minute. We should make use of it. Think positively. Let us do our part to protect the environment and ourselves. Don’t wait for others to do. We should show and lead by example. Others will follow it now or later. Then there is a glimmer of hope somewhere.

This Article is writttn by “Raham Ghaffar” Author at Envirocivil.com