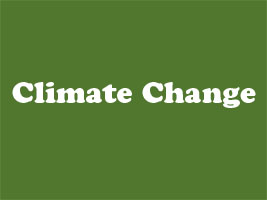 Most people’s from different disciplines like Zoology, Botany, Chemistry etc who had just baseline knowledge about climate when meeting us they are asking our views as an environmentalist that; if climate change is a real problem then why global community not agreeing on a common strategy?

I think there question is right at their own place because climate change is now a day’s everywhere on daily basis in news papers, journals, electronic media and scientists are concerns from quarter of century. IPPC, EU, other organizations and political groups had worked a lot on this issue. Former US vice president mr.Algore had also received a noble prize for his endeavors. Mainly there are three distinguished positions at climate change in global community; sceptics, orthodox and radicals.

Second position is of the main stream scientific body IPPC who had a declared aim to collect as much data as possible on climate change and subject it to rigorous review. IPPC had a great influence over the world to think about climate change. They had produced number of researches and successive publications over climate change and its implications so far. According to IPPC the today’s industrialization is actually subverting us and its likely impacts will be appeared later in 2040 and 2050.

Sceptics considering IPPC as the guardians of orthodoxy. According to them IPPC is became an establishment, seeing to world through their own eyes and they are considering IPPC as the enemy of independent and proper scientific thinking.  The sceptics are prone to think of themselves as independently-minded researchers, daring to challenge the conventional wisdom of the times.

There is a further diversion in mainstream scientific body arguing that climate change poses more danger and urgent issue and it is ordinarily acknowledged and this group is we calling called radicals. Radical’s arguments are based on past climatic changes and its catastrophes. According to them in past ages these events are happened with peoples before us but in a very short time even in 10 years and we will also facing the same. Their arguments of threatening future in a near future is  based on suppositions like, Antarctica’s ice will I disintegrate soon than normal and it will rise sea level to a very high extent and will further enhance climate change phenomena. Their second supposition is that frozen peat bogs of western Siberia and Canada will release a very high amount of methane which is much more potent greenhouse gas than carbon dioxide.

Some radicals—such as the scientist James Lovelock (The Disappearing Face of Gaya) and James Hansen of NASA—believe it is already too late to avoid dangerous climate change. Others say that we should concentrate on more energy to combat with climate change. Some argues that we can still hold it if we start work from today and now.

Now if we critically analyze these three positions then how can we say that which group is more near to real and who to be considered true and on what grounds because everyone had its own arguments and battle between them is immense and even bitter?

If we consider sceptics so this group is not as much important in scientific community but what they are saying, peoples influencing. This group is hearing by public and is politically important. IPPC is the mainstream scientific body but its arguments are future based and future had not arrived so far. If radicals are true and we are really facing a threatening future then politicians should trace the course and act immediately.

Every group trying their best to rubbish others arguments but one thing between these all groups is indisputable that state can play a major role to reach on a consensus. Kyoto protocol on climate change and recently climate change conference in Bali in 2007 had played a great role and Copen Heagon and other latest surveys proved that sceptics are declining as the climate change science progressed.

In one sense these politics are very important and beneficial for climate change because every scientific consensus is based on past debates, criticism, and political, scientific and public involvement. These all groups are tried their best to solve the problem at their own and at last will reached on a common agreement and this is a hope for climate change negotiators.