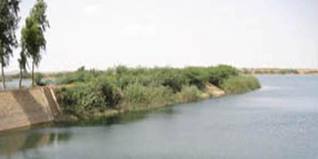 This article is aimed at monitoring the quality of Kalri Baghar (K.B) Feeder canal water and emcompasses the review of literature of the rivers, reserviors and lakes in view of various aspects of water and wasterwater quality of different regions.

This study focused the impact of sewage water added to K.B.Feeder canal, while it passes through SITE area Kotri. The area of K.B.Feeder canal under investigation was about km left from the exit of Kotri Barrage. The current investigations enabled us to fix five sampling stations along canal and five from sewage water draining into canal. Physical parameters such as temperature, pH, turbidity and conductivity were recorded according to standard procedures. The significant parameters in water quality and pollution control; (DO), COD and BOD were estimated. Sewage water was totally devoid of DO, it contained an average of 298 – 1056 mg/l COD and 221-864 mg/l BOD which reveals the high level in sewage water than NEQS values set by EPA Government of Pakistan.

The nutrients including nitrogen based on the determination of nitrate-nitrogen were assessed in K.B.Feeder canal and Site Area Kotri effluent. The levels of chlorides, sulphates and hardness in canal water varied within the limits 46 – 122 mg/l, 36 – 73 mg/l and 45 – 132 mg/l.

The work that has been described in this thesis shows that the K.B.Feeder canal is dirty and several locations unfit for human consumption. This is due to the heavy loading of industrial effluents from industrial area. The pollution can and should be cleaned to. It is a hazard to human health and it likely has sub-lethal effects on fish populations and the rest of acquatic ecosystem. It is the most improtant to note that the K.B.Feeder canal is a precious resource, valuable for many reasons and it is quite wrong to treat it as a sewer. To reduce the pollutants load on the canal, oxidation ponds (waste stabilization ponds) are designed for the treatment of industrial effluents before direct disposal to K.B.Feeder canal.

View all posts by Irshad Abbasi →