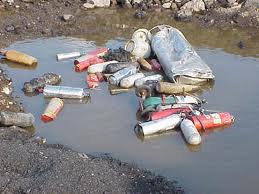 There are two main sources of chemicals by which chemicals enter into environment. The sources are Emissions and Effluents.

Entering of chemicals in air is called emissions. Like vehicles emits their smoke into atmosphere. Another example of vehicle is also from our daily life observation i.e. industries emits their emissions directly into air in form of smoke. The gases which are emit by factories and industries are carbon dioxide, carbon mono oxide, nitrogen oxide, nitrogen dioxide, sulfur dioxide and many more. Nitrogen dioxide and sulfur dioxide are cause of acid rain.  Smoke and gases emitted by volcanoes are also example of emission. Carbon dioxide causes the green house effect that leads to global warming and climate change.

Second source of chemical is effluents. It’s my observation that many factories and industries discharge their waste water and chemicals directly into the rivers, lakes and water bodies, which make these water bodies inhabitable and destroy aquatic life. Chemical fertilizers and nutrient run off from agricultural land also damages the habitat of aquatic life. These chemicals not only kill the aquatic animals but also change the chemical properties of water. The chemicals which are discharged with waste water by factories and industries are mercury, lead, cadmium and many more.

The best example of effluents according to me is “Nala Lai Islmabad/Rawalpindi”. In time of 1970, the water of this was pure and crystal clear. Even fish were also present there and people used that water but as the time passes, the factories and industries were developed and they started to discharge their waste effluents into this water. The chemicals not only disturbed the aquatic life but also income of those people who were associated with fisheries.

The impact of human activities on environment is not only much more complex but also affects the chain of interacting ecosystems.

The some chemicals that we found in environment is as under,

Organo chlorines are those chemicals which are found in pesticides and herbicides. Besides these, they can be found in polyvinylchloride (PVC), chlorine bleach and chemical disinfectants.  Compounds like polychlorinated biphenyls (PCBS) were developed originally for use in electric equipment such as cooling agents and very dangerous chemicals. They enter in our body through drinking water and eating such foods which are grown with certain agricultural chemicals and also through the plastic linings on canned and microwave food.

Talking about the affect of organochloride on human health, they are carcinogens. By the process of bioaccumulation, they enter in food chain and thus damage the liver, nervous system and reproductive system in adults. Organochlorides are also the cause of breast cancer because they mutate genes and they cause breast cells to become more receptive and to a cancer- promoting chemical called estradiols.

Besides their effect on human health, they also cause disturbance the environment when we burn it. Severe type of emissions enters in atmosphere while burning it.

These are chemical contaminates that are formed during combustion process such as waste incineration and forest fire. Beside these, some industrial process paper pulp bleaching and herbicide manufacturing also involved in formation of this contaminate.

Like. Other chemicals, dioxins also have environmental as well as health effects. The highest environmental concentrations of dioxins are present in soil and sediments.

As, we know that water bodies contains these kind of chemicals in environment, they not only effect on environment but also on human health. They contaminate the water bodies. Here, these become the part of aquatic life. Then human consumed it, they stored in fatty tissues and remain there for long period of time. Those people who have to exposed to high level of dioxin suffer from chloracne, a skin disease marked by severe acne-like pimple.

Cadmium is naturally occurrence element with other elements in earth crust. It is found in cadmium oxides, cadmium chloride and cadmium sulfate. It is used batteries, plastics, pigments and metal coating.

Through landfills, poor waste management, poor waste disposals and leaks at hazardous waste sites, it enters into environment. Particulates of both mercury and cadmium become a part of our atmosphere when we burn coal to get energy and incinerators house hold. Now, these particles move towards water or ground. These are taken up by animals and plants.

Besides these, cadmium enters in our body by inhaling, eating foods and drinking contaminated water.

Cadmium as well as mercury both has health effects. Both cause diarrhea, vomiting damaged lungs while inhaling, and kidney and bones diseases.

From all above discussions, all the time dangerous chemicals are introduced into environment. It times to take such steps which are better for both environment and health. Always try to prefer make biodegradable and dispose chemical carefully.