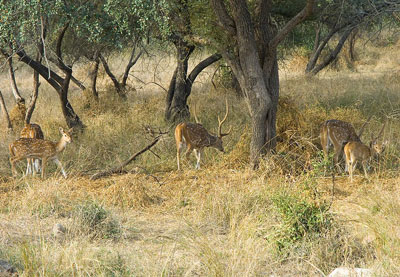 Wildlife refers to all living organisms in their natural habitat other than cultivated plants and domesticated animals. Wildlife can be found in all ecosystems. Deserts, forests, rain-forests, plains, grasslands, and other areas including the most developed urban sites, all have distinct forms of wildlife.

While the term in popular culture usually refers to animals that are untouched by human factor, Wildlife, in fact, comprises of the innumerous varieties of wild plants, animals, fungi and microorganisms that exist on our planet earth, rather than just cultivated plants and domesticated animals. Knowingly or unknowingly, we largely depend on this wildlife for every elementary requirement in our life. The food we eat, the clothes we wear, the medicines we consume, a variety of building materials used for construction, numerous chemicals used for manufacturing our necessities, all are extracted from the wildlife existing around us. A study by the American Association for the Advancement of Science indicates that as many as 40,000 species of plants, animals, fungi and microscopic animals benefit us in some way or the other.

Hazara is enrich with the immense beauty and wildlife. There are numbers of animals and birds found over here. There are few game reserves that support the wild life of Hazara. The most common game reserves that are being maintained by Khyber Pakhtoonkhwa Wildlife department in Hazara are Bagra, Kalinjer, Mang, Pind Hashim Khan, Rakh Sardaran, Kaigah Nullah, Battal, Behali, Jallo, Pharhana, Karair, Khuwajagan, Lassan Thukral, Sheikh Abad, Ralk Baiyan. Beside these, there are some private game reserves also.

The Wildlife department has recommended the provincial government to declare Tarbela Lake as a game reserve to ban hunting of migratory birds that arrive from as far away as Russia.

At a distance of forty kilometres from Abbottabad, towards Shinkiari, is the small village of Dhodial. Here is situated the Dhodial Pheasantry, the largest of its kind in Asia. The object was to provide the people an opportunity to observe the different kinds of pheasants found in the country. At the moment, there are 16 different species of birds in the pheasantry. Some migratory birds from Russia come to Haripur.

Some important herbs are found here, these include Gulkhaira, Khtmi, Musli Sufead, Kadapi etc.
Wildlife of Hazara maintains ecological balance of nature and maintains food chain and nature cycle. It has abundant economic value. Many wild plants provide useful substances like timber, paper, gums etc. It provides gene pool for the scientists to carry breeding programs in agriculture, animal husbandry and fishery. Wildlife provides aesthetic value to peoples living in Hazara and also for the tourist.

Illegal hunting of wildlife both for subsistence and commercial motives is common in the area and threaten ecologically significant wildlife species.

As the human population continues to grow, and as agricultural land becomes increasingly limited, the few species of plants that supply our food may no longer be sufficient. Soon people may need to look to other species to find food crops for the future. But by then, biodiversity may have diminished beyond hope. It is hoped that a wide scale awareness at all levels will pave the way for better understanding of the role the wildlife exhibits in the Hazara region.

This Article is writtenn by ”Raheel Ahmad” Author At Envirocivil.com

View all posts by Raheel Ahmad →