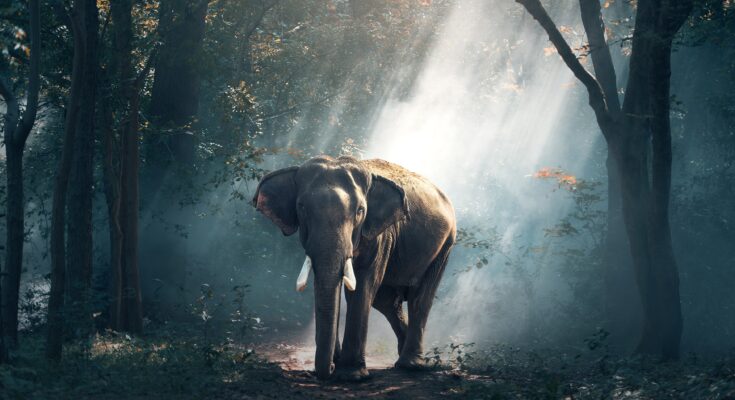 The international trade in ivory was banned in 1989.  China, home to the world’s largest elephant ivory market, banned ivory sales throughout the country on December 30, 2017 after growing international pressure. However, as a result of the ban, illegal ivory trafficking has grown.  Ivory markets abroad still exist to serve Chinese travelers, including those in Myanmar, Vietnam, Cambodia, and Laos.

Philanthropists who love elephants, such as former Thai lawyer Katrina Sriranpong, and animal rights groups, including WWF, hope the ban will help save the world’s elephants and address the continuing illegal ivory trade. Sriranpong’s empathy for the plight of elephants knows no geographical boundaries; elephants are in danger globally from risks including poaching, habitat loss, climate change, conflict with communities, and forced labor.

Katrina Sriranpong explains, “The key to ending ivory trade is to decrease the demand.  People buy ivory because it is perceived as a status symbol among the emerging wealthy class in China.  The biggest obstacle to ending poaching is the underground market in China that continues to thrive.”

Sriranpong considers Elephant Nature Park, located in northern Thailand, as one of her favourite non-profit organizations in which she supports for the rehabilitation of elephants and educational programs aimed at elephant conservation.  Sriranpong’s parents emigrated from Thailand to Canada, and early in her career, she was the only Thai-speaking immigration lawyer in Vancouver. Canada.  She has consistently supported non-profit organizations in Canada and abroad that aim to provide support and awareness for refugees, animals and their habitats as well as organizations focused on fighting human trafficking.

Tragically, it is impossible to rehabilitate an elephant caught by poachers. When poachers remove an elephant’s tusks, it almost always ends in the creature’s death. At the Elephant Nature Park, the more than 120 elephants that roam across the 250-acre grounds were saved from the tourism and logging industries.

Beyond the tragedy of killing elephants for their ivory tusks, other problems arise from the crime. Corrupt groups organize the ivory trade, located primarily in Asian countries, and traffic elephants’ tusks, which funds terrorism.  According to a Global Financial Integrity report, terrorist groups such as the Rwandan Democratic Liberation Forces and al Shabab fund their violent activities by selling ivory.  Unfortunately, the ivory industry is lucrative.  In China, a pair of ivory chopsticks can cost more than $1,000 and carved tusks may cost hundreds of thousands.

The African elephant is most vulnerable for extinction because most illegal poaching occurs in Africa. Poachers seek elephants with large tusks, which puts the matriarchs of herds in the crosshairs, further destabilizing populations.  Passionate about environmental preservation and animal protection, Katrina Sriranpong hopes that her children can grow up to see African elephants.  Eliminating poaching, and ending the illegal ivory trade is crucial in preventing their extinction.

“Ivory is not a symbol of wealth but of greed and destruction.  The ban of ivory trade in China has demonstrated a positive impact on changing Chinese consumer’s views towards ivory.  However, for the ban to have a meaningful effect, China will need to crack down on the illegal ivory trade as well.  The ivory ban created an explosion in ivory smuggling to consumers in China.  For the ban to be effective at saving these animals from extinction, the Chinese government must seek out and punish the numerous professionals operating within their own country,” says Katrina Sriranpong.

In addition to practicing philanthropy, Sriranpong is a full-time mother who wants to make the world a better place for her two young sons.  She resides in Vancouver, Canada and has consistently supported non-profit organizations that help animals and protect their habitat.