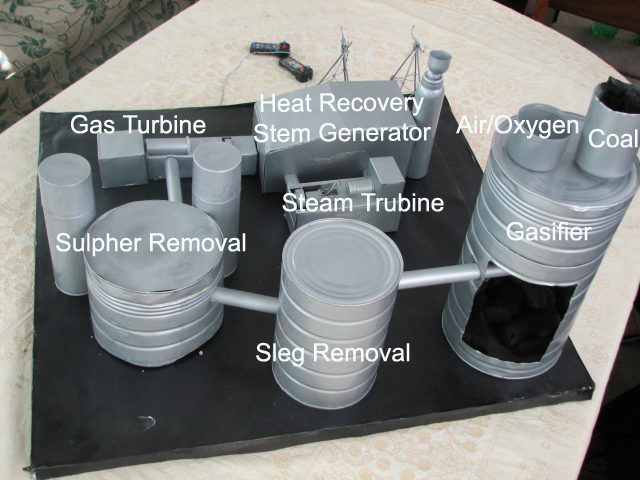 Coal Share in energy production is increasing day by day as in 2002 it shared 25% of the total energy share and it rose to 29% in 2008. This rise has mainly happened due to strain in other energy resources. Even though Pakistan’s Coal Deposits fall under the low quality coal i.e. lignite and sub-bituminous which has high moisture content (30-55%) and low carbon content (14-34%), it is best suited for power generation through coal gasification.

A demonstration of a 3-D model was given by the Chairperson Environmental Watch Pakistan, Shumaila Javed Bhatti, along with the Vice Chairperson, Maria Aslam to the Punjab Forums Chairperson. Who is currently working on the restart of the Thar Coal Project.

Back in old time’s coal was used to generate electricity through the process of combustion. Coal combustion consists of burning coal directly which resulted in pollution such as incompletely burnt carbon and ash. But as time passed a new and cleaner way of producing energy from coal was invented through the process now known as coal gasification. This

A coal gasifier reacts with steam and controlled amounts of air/oxygen under high temperature and pressure which breaks apart the chemical bonds between the coal molecules and mixing with steam to from synthesis gas (Syngas) which is made up of carbon monoxide and hydrogen. 99% of sulfer and other products are separated and processed to make commercial products such as chemicals, fertilizer and chemically pure sulfer. The sleg produced after the coal gasifies can be used in road making.

This syngas can be used in two ways; firstly carbon monoxide can be reacted with steam to make hydrogen and carbon dioxide. This carbon dioxide is separated for “Sequestration” and avoid it emission into the atmosphere. The remaining hydrogen can be buried in gas turbine for electricity generation.

The syngas is typically used to produce energy as a fuel in the Integrated Coal Gasification Combined Cycle (IGCC). It has two components: a gas turbine and a steam turbine. In gas turbine the air and syngas are compressed and combusted to spin the turbine and produce electricity. The exhaust is used in the Heat Recovery Steam Generator (HRSG) to heat the water to produce steam for the steam turbine to produce electricity. This system increases the efficiency of electricity generation. Another attractive feature of this system is that it can be designed to produce little solid waste and low carbon emissions.

The coal reserves in Thar are far greater than the oil reserves of Saudi Arabia and Iran if combined. Dr. Samar Mubarak Mand stated that Thar Coal Reserves can produce energy of 50000 MW for 700 generations.

It is a great dilemma of our nation that every time someone tries to come up with new environmental friendly technology, there is hurdle appearing in the way. Is it the same conspiracy as the Kalabagh Dam so that Paksitan cannot depend on its own resources and has to be dependent on others? The Punjab Forum says on this issue that is the anti-forces are planning on bleeding Pakistan dry as they are well aware of the fact that soon Pakistan will be the country with the world’s richest resources.

Chairperson Punjab Forum said on the occasion that like Kalabagh was disputed by design so that Pakistani cannot benefit from it, so is the Thar Coal Project. A Political Parties leader (MQM), Haqiqi Afaq Ahmed in an interview, with a Karachi based magazine has openly disclosed that he knows the names of all the politicians of Sindh who are paid by RAW to make launch anti-Kalabagh dam Movement. And it might be the similar case with the Thar Coal Project.

He also said with disappointment that a mere energy member, Shahid Sattar never even personally visited the Thar coal mine and he had the guts to make such a statement that the Thar Coal Project is a fail? However we should not be disappointed, with grace of Allah resources cannot be stolen, we can decide after 10 years or 20 years to utilize these resources but there is, however a dire need to get our hands on these resources and save Pakistan from the misery it could plunge into.

the writer of this article, Shumaila Javed Bhatti,  is a senior author of envirocivil.com and the Chairperson Environmental Watch PK

One Comment on “Coal Gasification in Thar: The Conspiracy”