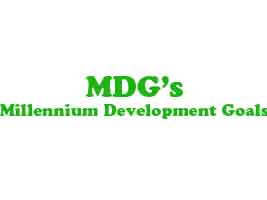 The Millennium Development Goals (MDGs) are eight international development goals that all 193 United Nations member states, including Pakistan, and at least 23 international organizations have agreed to achieve by the year 2015. There are 21 targets, and a series of measurable indicators for each target.The MDGs are a roadmap with measurable target and clear deadlines for improving the lives of the world’s poorest people, with major focus on poverty and hunger alleviation and addressing poor health facilities, gender inequality, lack of education, lack of access to clean water and environmental degradation. The majority of countries have been achieving their goals due to clear internal and external factors of population and economic development. The goals are:

Pakistan’s progress towards reaching the MDGs has been uneven despite the fact that it is critical for country’s overall social, economic and environmental development. The country has been active in achieving some of the goals, while it has been reluctant on others.  As per UNDP, sufficient progress has only been made on about half of the targeted indicators while others lag behind.

In the recent meeting of National Assembly’s Special Committee on MDGs held on Friday (7th September, 2012), it was pointed out that lack of availability of adequate funds and increased investment has been very critical for achieving MDGs in Pakistan before 2015 deadline.

The first most important challenge to achieving MDGs in a given timeframe is the availability of adequate funds and investment. Although developed countries’ aid for the achievement of the MDGs has been rising over recent years, it has been diverted towards debt relief, natural disaster relief and military aid which does not further the country into development. Similarly, millions of dollars have been transferred directly from the wealthy nation governments to the often bureaucratic or corrupt governments in Pakistan. As a result, MDGs targets yet lag behind due to lack of availability of adequate funds and increased investment.

The other major challenge is planning right strategy and prioritizing MDGs/targets. In a recently held seminar on MDGs organized by Shirkat Gah in Karachi, Ms. Khawar Mumtaz, CEO of the Shirkat Gah, said that all the MDGs are interlinked and should be dealt with in an integrated way. This certainly makes sense. I however believe that we also need to prioritize these MDGs and go ahead priority-wise.

The sequence of the MDGs reflects that “MDGs can easily be achieved in a given timeframe if we, first of all, put ample resources, energy and planning in achieving MDG-1 (eradicating extreme poverty and hunger)”. Once the first MDG is achieved, it will help achieve MDG-2 (achieve universal primary education) and so on and so forth. In other words, if we invest in achieving MDGs without addressing the MDG-1, it is likely to go all in vain and any success in this regard would also be unsustainable.

During the seminar, a representative from a Sindh based organization, Mr. Khair Muhammad Channa, stated that the main problem of community members is “Poverty”. He shared that the community members have constantly been asking to them that “they agree with advices regarding health, education, gender equality, etc. but nothing will actually change if their state of poverty is not eliminated”.

The conventional economic policies and theories have failed to deliver to the poor community in Pakistan. I personally don’t agree with the “trickle down impact” theory that has failed worldwide. It’s a capitalist approach. I always advocate for bottom-up approach i.e. empower and educate people (both female/male) at the grass community level and the people will be better off and will take hold of their rights on their own with little assistance.

Women constitute 50 percent population of the Pakistani society but due to widespread poverty, illiteracy and uneven socioeconomic development, women have a very low percentage of participation in society outside of the family.  Women’s access to property, education, employment etc. remains considerably lower as compared to men. Consequently, women fail to play their potential and vital role in country’s overall social, economic and environmental development.

I take the opportunity here to draw your attention to another less familiar but very important challenge being contended by the non-government organizations (NGOs) that is “community mobilization”. The community work, in fact, is a very sensitive job as we enter into a community’s life and the outcome of our interventions could be either “positive” or “negative”. Any community work that leads to building trust, enhancing livelihood opportunities and reducing poverty among the target community across board by making their living standards better, it will bring a real and lasting social change in the community. Hence, any success in the field of health, education, gender, peace, environment, etc. would also be sustainable.

In case of a positive outcome, by way of well thought and sustainable community interventions, community is transformed into a progressive and thriving segment of the society where they tend to enjoy peace, good health, education, no exploitation, better environment for Trade/Services, Gender Equity, clean environment, etc.

Poverty is thus the root cause of social disorders and is also a major obstacle in achieving MDGs on sustained basis. Eradicating poverty, in fact, needs lots of reforms i.e. economic reforms, land reforms, wealth reforms, tax reforms, fair justice, economic justice, peace, rule of law, green economy, green governance, etc. Since this does not suits to our ruling elites as well as the influential international countries, there is no breakthrough in the status quo.

In a country like Pakistan, poverty eradication needs (1) a dedicated and influential team, (2) 5 – 10 years time and (3) few million dollars for development projects that are designed to produce livelihood opportunities across board and develop sectors that sustain country’s economy. Don’t you think that we can easily mobilize this much local resources and accomplish MDG-1 without borrowing money from out world?

It is however a matter of grave concern that poverty is on increase in our country despite spending billions of dollars on projects that are not designed to produce livelihood opportunities across board and that are only benefiting the already privileged class of the society. Few to name, for instance, are mega projects such as Motorway, Rental Power Plants, Zulfiqarabad City (recently announced), etc.  International organizations & industrialized countries are partner in this wastage of resources as they provide huge funds in this regard and keep our governments indebted.

It’s a vicious circle in fact. Based on the capitalist agenda; industrialized countries are interested only in globalization, trade and market for their industrial products. And our ruling elites are merely interested in maintaining their status quo, at any cost, for their sustained rule and survival.

In this scenario, the civil society initiatives, cooperatives, charity foundations and progressive political parties have the role to play. We need to integrate our efforts and promote unity, joint efforts, coordination, sincere attitudes, voluntarism, honesty and innovation. Frankly, we also need to assess ourselves (our strengths and weaknesses) and improve upon before any community intervention.

Author:Tahir Hasnain is a veteran researcher and development practitioner serving the non-government development sector since two decades. Currently he works for Shirkat Gah as Programme Manager, Environment & Livelihood. He can be contacted at – tahir@khi.sgah.org.pk