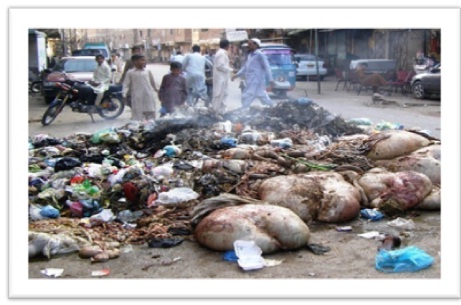 People complain about the much slower disposal of offal and other animal waste thrown uncovered in the midst of residential areas after sacrificing of hundreds of thousands of animals by the citizens as the necessary ritual of Eid ul Azha. Such highly random throwing of animal waste could cause an outbreak of infectious diseases anytime in the overcrowded residential areas.
Dwellers of various parts of the country had been pinning great hopes to the revival of town administrations, after the gap of a long time, for resolution of their long-pending municipal and civic problems, especially unattended piles of garbage nearby to densely populated residential areas, posing serious health hazards to their residents.
Town administrations claim to have made effective arrangements for the removal of offal and cleanliness during Eid ul Azha. The concerned public quarters said that the sanitation and cleanliness situation had been a lot better in residential areas.
In several instances, especially in far-flung areas, offal and other animal waste remained unattended in open grounds and alleys from dawn to dusk. In some brazen incidents, the stray dogs and scavenger birds were found tearing up and devouring upon these openly thrown pieces of offal and other parts of animal waste, creating serious health and civic problems.
In some areas civic situation had been already pathetic with sewage overflowing on several of the major roads of city and with these scattered unattended offal and other parts of animal waste, the situation has been quite messy in the area with the passage of Eid ul Azha days. In several residential parts, people on self-help basis and privately hiring the services of sweepers disposed of offal and other animal waste and also undertook health preventive measures as till late evening there had been no disposal work by the town administration. 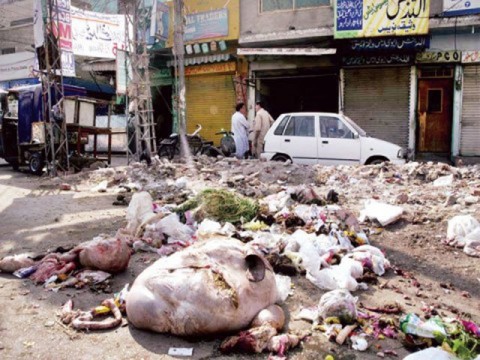 Appreciable practices:
Every town administration had designated its own offal collection and dumping points for proper disposal of offal and animal waste. These trenches for disposal of offal would be filled after the third day of Eid ul Azha.
Extensive insecticide fumigation and aroma spray carried out in residential areas to prevent the outbreak of contagious diseases and ameliorate the civic and sanitation situation in major residential areas of the city.
The management has failed to dispose of the intestines, offal and carcasses of sacrificial animals the jurisdiction during the Eid ul Azha.
A visit revealed that sanitary workers of the civic body did not bother to clean the areas of scattered entrails of the sacrificial animals, which were still lying along the main road.
The management before the Eid-ul-Azha had divided the city into zones for effective implementation of the action plan, especially prepared for cleanliness.
To keep the city clean and remove remains of the sacrificial animals cancellation of leaves of the Sanitation staff was announced to work round-the-clock in three shifts.
In many major cities the authorities made deep ditches for the proper disposal of the of offal and animal flashes while Lime powder also being sprinkled and applied to garbage trolleys and sacrificial places to avoid pollution and rush of birds.
The vehicles and staffers used by the Town administration for emergency duties for disposing of offal after sacrificing of animals, proved to be too less in numbers given the heavy volume of task.

Malfunctioning of administration:
The inhabitants have been urging the administration high-ups to ensure cleanliness of the entire city on emergency basis to avoid nauseating odor and related problems.
It was also observed that in most parts of the capital city excluding posh areas people have not thrown the offal and other wastage of sacrificial animals at prescribed places.
The improper disposal of offal and wastes is not only polluting the environment but also disturbing the aerial traffic in the airspace near the airport. After the slaughtering of animals near railway tracks, the intestines, offal and other wastes need attention of the authorities to prevent people from spreading pollution in jurisdiction of airports and cant areas.
Birds pose a safety threat to airplanes, especially during landing and take-off. When birds strike an aircraft traveling at high speed, the impact can sometimes be dangerous. Despite Pakistan Air Force (PAF) awareness campaign before Eid, the locals as well as the municipal staff could not ensure quick and safe disposal of the remains of the sacrificial animals in the jurisdiction of the airport.
The surrounding area’s pollution attracted birds and causes problems to the pilot. The removal of dirty flashes and meet of animal from the sites of slaughtering centers is direly needed in order to avoid any misshape.
Some residents throwing the animals` waste into narrow drains, causing stringent smell in their locality.
Suburbs were specially ignored by the sanitary workers of the civic body where remains of the sacrificial animals had created serious problems for residents.

The Irony:
The reckless attitude of the local municipal administration and residents not caring for cleanliness could also cause diseases. There is severe need that municipal administration should ensure that the waste of each animal should be dumped in deep ditches to avoid pollution as well as rush of birds toward slaughtering sites in the city. Those people who violate law and leaving animal wastes on open surface of the earth must be charges with heavy fine to forces them to keep the environment clean.
Measures to be taken:
• A consolidated strategy should be adopted on the occasion of Eid-ul-Azha for sanitary arrangements and disposal of offal of sacrificial animals.
• Cleanliness is an article of faith and as a nation, it is a collective responsibility to keep the surroundings clean.
• Cleanliness arrangements should be ensured on Eid as well as Taroo and Maroo at any cost and stern action should be taken against the persons burning “Siri Paays” (head and feet of sacrificial animals) on the roadsides as it causes environmental pollution.
• The administrative officers and officials displaying negligence towards sanitary arrangements during Eid days will not be spared.
• Ban on the sale and purchase of sacrificial animals in the city should be strictly implemented and this business should be carried out only at the points specified for this purpose.
• A vigorous public awareness campaign should be launched for maintaining cleanliness during the Eid days and disposal of animals waste and the assembly members should personally supervise the Eid arrangements.
• The Chief Minister directed that complaint cell regarding cleanliness arrangements should be activated and it should work round the clock to redress public complaints.
• Modern technology should be utilized for the supervision of the sanitary staff and planning should be made for this purpose with the assistance of Information and Technology Board.
• Volunteers should also be deputed for sanitary arrangements on the occasion of Eid.
• Special bags should be given to the citizens for disposal of animal waste while special centers should also be established for the collection of offal from where it will be taken and destroyed at specific places in a proper manner.