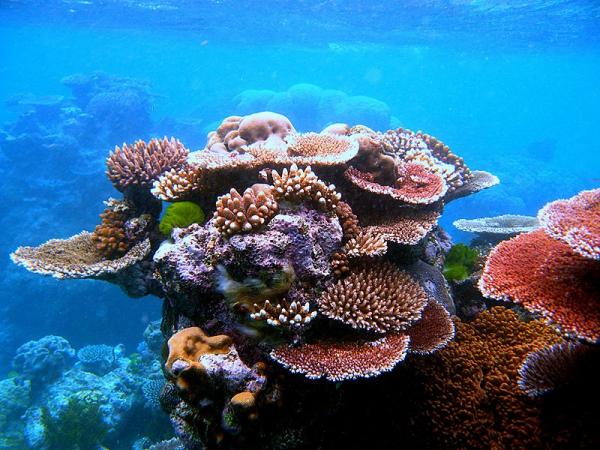 Most of us consider “coral reefs” as warm, clear, shallow ocean habitats that are rich in life. But, a question that arises here is what exactly corals in real are: animal, mineral or vegetable? A coral is actually an animal that belongs to Phylum Cnidaria and lives fixed to the seabed instead of swimming free. Technically, there can be two types of corals: rock hard corals and soft corals.

Nearly 25% of all marine life depends upon coral reefs for their survival. Yet, reefs make up only a very small part of the world’s oceans about 0.1% of the vast ocean floor; because of this coral reefs are often called “Rainforests of the Sea”. Some look like brains and some like antlers of deer. These corals provide shelter for many animals in this complex habitat.

Principle coral reefs and reef areas of the world include The Great Barrier Reef, The Belize Barrier Reef, Pulley Ridge, The New Caledonia Barrier Reef, The Andros-Bahamas Barrier Reef, The Red Sea Coral Reef and Reefs in Maldives. There are over 500 species of corals in the world. The number of invertebrate species that live on reefs in the Northeast Atlantic Ocean can be as high as that found in shallow-water tropical reefs.

Coral reefs are of great economic and ecological significance. By removing CO2 from the atmosphere they help moderate atmospheric temperature. They act as natural barriers that help protect 15% of the world’s coastline erosion by battering waves and storms. They provide jobs and building materials for some of the world’s poorest countries and also support fishing and tourism industries. They are the basis of 10% world’s diet and untapped pharmaceutical resource for medicines.

Not many Pakistanis are aware that we have coral reefs near our cleaner shore but Centre of Excellence in Marine Biology of University of Karachi has already started it’s work of collecting samples, studying and classifying  more than 30 species of corals found in the clean beaches of Pasni, Astola Island and Charna.

Many sunken ships are now used as reefs. Humans are utilizing such artificial reefs to replace the coral reefs that have been destroyed. Coral reefs are in crisis, dying at an alarming rate worldwide. They have survived tens of thousands of years of natural change but many of them may not be able to survive the havoc wrought by humankind.

View all posts by yashfeenzahid →