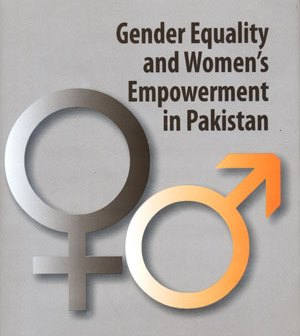 Women empowerment is a matter of key concern in national and international policy making and activities of social life. Nations cannot achieve their development goals if their women are discriminated. Women’s empowerment is in fact necessary condition for socio-economic development of a country.

Women in most part of Pakistan are not enjoying the fundamental human rights. They are less healthy, less nourished and more vulnerable than men. Patriarchal nature of society in Pakistan, provide women fewer chances to acquire property, low level of legal support for justice and few opportunities for political participation. They have to cross a number of socio-cultural barriers when they want to work for income generation.

Women are considered as mean of producing children, caring family members and providing them emotional satisfaction. As a result, their identity is lost under the burden of responsibilities and they do not have time to think about themselves. In their routine life, most of the women do not have their own goals but they respond to the need and demands of others. A woman do not have power to make decision on how to behave or dress, whom to marry, whether to have children and how many, contact with outside world, education, her health and so forth. All powers are vested with the males of the family. Despite their long hours of work and sacrificing attitude towards their family and in-laws, their work is not recognized by their family as well as the society at large. Conversely in return most of the women receive unfair treatment of their near relatives and male family members. Their independent existence is denied and they are considered as subservient of man. Such stringent circumstances not only make women weak and dependent but also lower down their social status.

How women can acquire their due status? How they can acquire freedom to speak for their rights? How they can protect them from unjust treatment? How their contribution to household activities can be recognized? How can they contribute to the wellbeing of their family and the progress of country? Answer to all these question lies in the frame work of women’s empowerment. In recent years question of women’s empowerment is of key concern in national and international policy making and civil society activities.

Empowering women by increasing their status and autonomy within families is integral to many international health and development programs. One of the eight Millennium development goals calls for achieving gender equality and women’s empowerment, Empowering women is also crucial to reach many of other goals including reducing child mortality, improving maternal health, achieving universal primary education, combating HIV/ AIDS and the prime goal of reducing by half the proportion of poor people by the year 2015. Most of the prevailing social problems in Pakistan like poverty, malnutrition, illiteracy, environmental hazard, unhygienic living standard, high population growth rate, low economic productivity, less per capita income, lower household status, child mortality, lower health status of women, maternal mortality, gender inequality, and violence against women etc. are directly or indirectly associated with women that can be tackled effectively by social and economic empowerment of women.

Education plays a vital role in empowering women and it is thus recommended that there is a need to make some radical changes in existing education system that promote gender awareness. Adult education should be launched to educate married couple. Legislation should be made to fix the minimum marriage age for girls at 18 years as more than one-third of the maternal deaths in the country are reported to be occurred among females who were married between the ages of 14 and 17 years. Lack of property ownership is another cause of women’s powerlessness. Therefore there is a need of legislation that must be supportive for women in acquiring and retaining the property. In view of meager percentage of women in jobs, there is a need to enhance the labor force participation of women. Some incentives should be given to the women by government for enhancing their job participation. Most of the women complain that their husband does not allow them to do paid work due to lack of security of women. Therefore there is a need to establish enabling environment for women and effort should be made to design such jobs or businesses that can be started within home there is need of motivators and facilitators for mobilizing and providing such services to women. In order to enhance political participation, awareness about rights, media should play active role especially the TV. For developing political participation, their social network can be made effective by organizing their groups. NGOs and local government can play a pivotal role in this regard.

Women have a critical role to play in the consolidation of peace in the country and for the positive developmental processes. However, several obstacles make women’s participation in the electoral process more difficult than men’s. These obstacles include cultural factors such as deficit of civic duty, practical obstacles such as family responsibilities or even the fear to compete with men during physical security-related fears, economic obstacles that make access to infrastructures difficult, as well as a high level of ignorance.

Potential voters, candidates and observers, women have the right to assume senior management positions. For this very reason, the integration of the gender concept into the electoral process must not be reduced to mere sensitization of women as voters given their large representation, but must also integrate this concept with a view to promoting women’s participation in the electoral process as candidates, observers, political parties’ witnesses and/or members of the electoral administration.

Women, being aware of potential risk in our physical environment, can help protect and manage urban environment for the citizen’s health and economy. At the town level, there is urgent need to identify and address urban issues of concern to women. One of the key principles of this campaign should be that women need to be more involved in decision making and discussions which have an impact on their urban environment. Women are in fact half of our society. What keeps them from being included in urban governance and what happens as a result of their exclusion? Since they spend more time at home, therefore if the things at home and in the neighborhood need managing and organizing, then the people who do it should certainly be more qualified to make decisions. So it is recommended that women must be involved in urban governance so that women can play their role as decision-makers and city managers in this regard.

According to the International Union of Local Authorities (IULA), 1998; “From a gender perspective, local government is the closest and most accessible level of government to women. Local governments traditionally provide services utilized by individual households such as electricity, waste disposal, public transport, water, schools, health clinics and other social services. The decisions of local governments therefore have a direct impact on the private lives of women, because they are traditionally responsible for providing for and caring for the family and the home in most countries. Women also have important and unique contributions to make to the development of these services. They must be fully part of the local democratic system and have full access to the decision-making structure. Until the interests of women have been represented at the local level, the system is not fully democratic.”