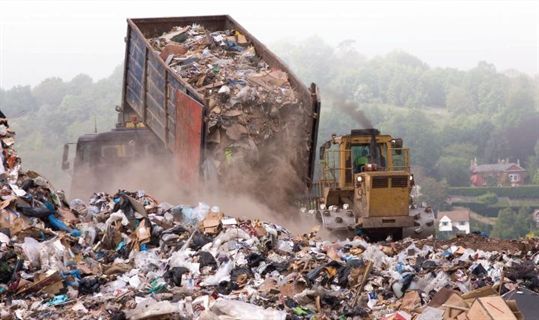 Hazardous Wastes are solid, liquid, or gas wastes that can cause death, illness, or injury to people or destruction of the environment if improperly treated, stored, transported, or discarded. Substances are considered hazardous wastes if they are ignitable, corrosive, reactive, or toxic. Mixtures, residues, or materials containing hazardous wastes are also considered hazardous wastes. Many dangerous substances can be used only with special precautions that decrease their risks. When discarded, these substances are no longer under the direct control of the user and may pose special hazards to people or other organisms that come in contact with them. Because of such potential risks, hazardous wastes are processed separately from ordinary wastes.

Hazardous wastes are generated by nearly every industry and those industries that claim to generate few hazardous wastes on their part, nonetheless use products from hazardous waste generating industries. For example, in the computer software industry, writing software generates little hazardous waste, but the manufacture of computers involves many industrial processes. Making a computer circuit board generates spent electroplating baths that contain metal salts, and the production of computer chips uses acids, other caustic chemicals, and solvents. Other hazardous wastes are generated in the manufacture of fiber optics and copper wire used in electronic transmission, as well as magnetic disks, paper for technical manuals, photographs for packaging and publicity, and trucks for transportation of the finished product.

Industry is not alone in generating hazardous wastes. Agriculture produces such wastes as pesticides and herbicides and the materials used in their application. Fluoride wastes are by-products of phosphate fertilizer production. Even soluble nitrates from manure may dissolve into groundwater and contaminate drinking-water wells; high levels of nitrates may cause health problems. Household sources of hazardous wastes include toxic paints, flammable solvents, caustic cleaners, toxic batteries, pesticides, drugs, and mercury from broken fever thermometers. Local waste-disposal systems may refuse these items. If they are accepted, careful monitoring may be required to make sure soil or groundwater is not contaminated.

The householder may be asked to recycle or dispose of these items separately. Renovations of older homes may cause toxic lead paint to flake off from walls. Insulation material on furnace pipes may contain asbestos particles, which can break off and hang suspended in air; when inhaled, they can cause lung disease and cancer. Hospitals use special care in disposing of wastes contaminated with blood and tissue, separating these hazardous wastes from ordinary waste. Hospitals and doctors’ offices must be especially careful with needles, scalpels, and glassware, called “sharps.” Pharmacies discard outdated and unused drugs; testing laboratories dispose of chemical wastes. Medicine also makes use of significant amounts of radioactive isotopes for diagnosis and treatment, and these substances must be tracked and disposed of carefully.

Hazardous wastes may pollute soil, air, surface water, or underground water. Pollution of soil may affect people who live on it, plants that put roots into it, and animals that move over it. Sludge from municipal sewage disposal may contain toxic elements if industrial waste is mixed with domestic sewage. If the sludge is used as a fertilizer, these elements may contaminate fields. Toxic substances that do not break down or bind tightly to the soil may be taken up by growing plants; the toxic substances may later appear in animals that eat crops grown there and possibly in people who do so.

Air may become contaminated by direct emission of hazardous wastes. Evaporation of toxic solvents from paints and cleaning agents is a common problem. The air above hazardous waste may become dangerously contaminated by escaping gas, as can occur in houses built on mine tailings or old dump sites. Basements of homes built over uranium mine tailings often contain high levels of radioactive radon gas escaping from the radioactivity below.

If rivers and lakes are polluted and become toxic enough, they may kill animal and plant life immediately, or it may injure slowly. For example, fluoride concentrates in teeth and bone, and too much fluoride in water may cause dental and bone problems. Compounds such as dichlorodiphenyltrichloroethane (DDT), PCBs, and dioxins are more soluble in fats than in water and therefore tend to build up in the fats within plants and animals. These substances may be present in very low concentrations in water but accumulate to higher concentrations within algae and insects, and build up to even higher levels in fish. Birds or people that feed on these fish are then exposed to very high levels of hazardous substances. In birds, these substances can interfere with egg production and bone formation.

Even pollution that is not toxic can kill. Phosphates and nitrates, usually harmless, can fertilize the algae that grow in lakes or rivers. When algae grow, in the presence of sunlight, they produce oxygen. But if algae grow too much or too fast, they consume great amounts of oxygen, both when the sun is not shining and when the algae die and begin to decay. Lack of oxygen eventually suffocates other life; some living things may be poisoned by toxins contained in the algae. This process of algal overgrowth, called eutrophication, can kill life in lakes and rivers. In some cases, particular algae can also poison the drinking water of people and livestock.

Underground pollutants can be carried by underground water flow. These wastes form spreading underground plumes of contaminants, which may reach the surface if the water emerges in a spring or is pumped by wells. Especially dangerous are solvents that may have leaked from underground storage tanks or may have been carelessly poured on the ground. Toxic metal ions may also be present in these waste plumes.

The best way to eliminate hazardous wastes is not to generate them in the first place. For example, improvements have been made in the production of integrated circuits: The toxic chlorinated hydrocarbons commonly used in the 1970s were replaced in the 1980s by less toxic glycol ethers and in the 1990s by low-toxicity esters and alcohols. Recycling is the recovery or reuse of usable materials from waste. For example, approximately 15 percent of sulfuric acid is recycled in chemical manufacturing. In the past, most sulfur used for sulfuric acid production was mined; now the amount of sulfur recovered from smelters (facilities that remove metals from ores), refineries (facilities that purify substances), and manufacturers is more than double that produced by mining.

Wastes may be made less hazardous by physical, chemical, or biological treatment. For example, sodium hydroxide has been used to treat acid wastes at integrated-circuit plants. Some newer plants now treat hydrofluoric acid wastes with lime, producing relatively harmless calcium fluoride, the mineral fluorite. Sulfuric acid wastes, if not recycled, can be treated with ammonia wastes from the same plant, forming ammonium sulfate, a fertilizer. Incineration has been used since human beings learned to control fire. It is the preferred method of handling infectious medical wastes. However, it should not be used for wastes that contain toxic heavy metals or chlorinated hydrocarbons: When burned, old painted surfaces can release lead or arsenic into the air, whereas chlorinated hydrocarbons produce hydrochloric acid and dioxins. Solids left over from incineration may have to be disposed of as hazardous waste.

Solidification of wastes involves melting them and mixing them with a binder, a substance that eventually hardens the mix into an impenetrable mass. One suggested treatment of radioactive waste involves turning it into a glass through a process known as verification. Sometimes waste can be stabilized on-site i.e. kept from moving through groundwater and air; simple remedies such as covering the waste may be sufficient. Other stabilization methods involve building a barrier around the waste. This barrier can be of plastic, steel, concrete, clay, or even glass.

Placing liquid or semi liquid wastes in unlined pits (Disposal Surface impoundment) keeps waste in long-term storage, but it is not considered a method of final disposal. About 8 percent of hazardous waste is injected into deep wells; 21 percent enters landfills (large, unlined pits into which solid wastes are placed) as its ultimate resting place. Abandoned and particularly serious waste sites may qualify as “Superfund” sites, eligible for cleanup with government funding.

The serious problem of underground plumes of hazardous materials leaving the original disposal sites has only partial solutions at this time. The typical method of handling this problem is the drilling of wells around a plume’s perimeter. Hazardous materials are then removed from some wells, and water may be injected into other wells to produce a barrier to the plume’s motion. Drilling wells and monitoring holes near a toxic site carries risks; a plume originally confined between strata (horizontal layers of rock) may penetrate vertically through a drilled hole and escape confinement.

A recent method of treatment for shallow plumes of chlorinated solvents depends on their chemical reactivity. A trench is dug around the leaking waste site and filled with a mixture of soil and powdered iron. The iron then reacts with the chlorinated solvents, turning them into simple hydrocarbons, which are less hazardous. Hazardous waste has a broad definition in common use, but hazardous waste has a narrow, specific meaning and it is needed to segregate hazardous materials from general solid wastes unwanted solid or semisolid substances to prevent soil and groundwater contamination.

Hazardous wastes are a type of solid waste. Solid wastes are defined quite broadly and may include solids, sludge, liquids, or gases. Wastes that are not considered solid waste include domestic sewage or wastes that pass through a publicly owned treatment works, industrial discharges, irrigation water, nuclear materials, mine wastes remaining in the ground, recycled sulfuric acid, and some other recycled materials.  Some of the materials excluded from the definition of hazardous wastes are agricultural wastes used as fertilizers; overburden returned to mines; chromium wastes; materials contaminated with petroleum from the cleanup of underground tanks, such as those used at gas stations; wastes from the burning of coal or other fossil fuels; wastes from oil, gas, and geothermal exploration and wells; and household wastes.