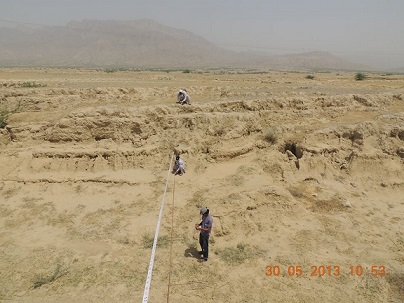 Pakistani economy depends on agriculture for its survival. Soil erosion and water scarcity are the two major impediments to agricultural development in the country especially, in the dry-land areas. Pakistani research institutes need to step out of their dens and bring their research findings and skills to general masses. One such project is the Watershed Rehabilitation Project carried out by National Center of Excellence in Geology, University of Peshawar, Pakistan in the Southern Dry-lands of Khyber-Pakhtunkhwa province.

The project is sponsored by United States Department of Agriculture and is conducted in collaboration with International Centre for Agriculture Research in Dry Areas (ICARDA). The Watershed Rehabilitation Team of the NCEG has established several demonstration sites in Tank and Dera Ismail Khan Districts, for soil and water conservation measures. “Our activities include soil and water conservation measures”,Wajid Ali an Environmental Scientist, Scientific Officer and Incharge of the project activities on the ground told to the senior author Mr.sajid ali of Envirocivil that “like Gully Management, Rainwater and run-off harvesting and the demonstration of high efficiency irrigation systems like drip and sprinkler irrigation systems.”

The NCEG Watershed Rehabilitation Project Team has also introduced some newer and previously un known technologies in to the area. Muhammad Usman belongs to Tank and is working in the project as Research Fellow; he told to Envirocivil that “Negarim micro-catchments and Planting Pits both are used for on-farm rainwater harvesting. We introduced this technology for the first time in this specific region. And these are working very well”. Among others Gully plugs used for gully erosion control and Drip Bucket Irrigation System a unique low head irrigation system suitable for growing vegetables on a small scale are of special interest to the local people. Shabeer Ahmad Research Fellow, believes Drip Bucket Irrigation System would spread fast in the area “it is very low cost, it is water use efficient and it is easy to install, I believe these are all the ingredients needed for a technology that could be called as adoptable” using the technology, the project team has successfully grown different types of vegetables in the area.

The response of the local people towards the project is positive and they are actively participating and some technologies have been replicated at a faster rate. “Gully plugs are easy to construct, they are an effective means of gully erosion control and also provide a temporary source of ground water recharge and drinking water for livestock, owing to the low cost involved it is not surprising that they have been replicated faster than other technologies” says Wajid Ali. Soil and Water Conservation has been by and large ignored by the Environmental Sectors. The countries primary agencies are either fixated to pollution or have no funds to carry out such projects.  NCEG’s Watershed Rehabilitation Team has shown that low cost technologies are not only effective in controlling soil erosion but also can help in increasing the acreage by bringing barren land under cultivation. Technologies like drip bucket irrigation system, run-off collection ponds, roof top and on-farm rainwater harvesting can also help as an alternate source of water in rain-fed and water scarce regions. The project can serve as a model for other dry land regions and similar agro-ecological zones of the country.

Write to author at: sajedali2003@gmail.comv Or give your comments in comment box below