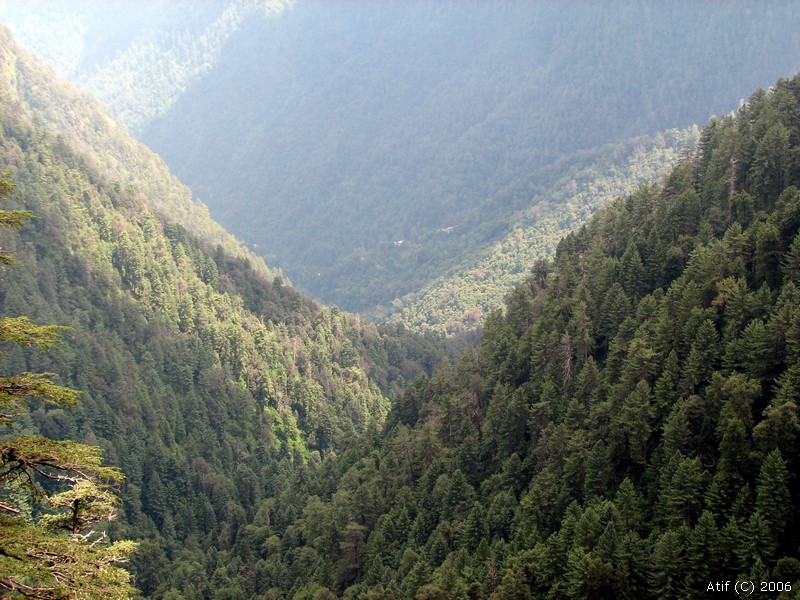 Ayubia National Park is a protected area of 3312 hectors located in Abbottabad, Khyber Pakhtunkhwa province, Northern Pakistan. It was declared a national park in 1984. Ayubia was named after the late Muhammad Ayub khan (1958 to 1969), Second President of Pakistan. The area sports temperate coniferous forest and temperate broad leaf and mixed forest. Ecoregean habitats, with an average elevation of 8000 feet above the sea level.

Ayubia National Park is representative of Himalayan moist temperate forest.Problems related to conservation at Ayubia National Park are similar to those found elsewhere in the Himalayan. Mountains degradation due to overgrazing by livestock , uncontrolled tourism , collection of Non-Timber forest produce encroachment for human habitation, cultivation and human wild life conflicts. In addition poaching also threatens many mountain, ungulates inside protected areas at Ayubia National Park. The collection of fodder is seen by conservation agencies and the forest department as heaving a negative impact on biodiversity consequently there is a need for understanding the variety of modes of management of fodder with in agricultural and wasteland areas as well as in rangelands  in order to reduce the impact of fodder collection on biodiversity .

Women in Ayubia National Park are responsible for fodder collection and understanding in their knowledge and practice related to fodder or management is important for the development of sustainable management models. Leopards have been in the news recently, and it is time that the public is made aware of the importance of protecting one of the most beautiful animals of the world .Due to reckless hunting there are only a few leopards left in Ayubia National Park. Common leopards have survived in very small numbers in Ayubia National Park. Starving and hungry they strange into villages, and towns in search of food during winter month. The sight of leopards creates un explained terror.

Leopard is called lion in Ayubia National Park, because of the dread and the urge to kill, the common leopard has become a threatened species in Ayubia National Park. The leopard is a solitary animal of the bush and forest and is nocturnal in habit. It is an agile climber and frequently stores the remains of its kills in tree branches. Leopard spotting viewing by binocular photo graphing and feeding would be interesting and a good sport. Killing and gunning down this animal is criminal act. Leopard in Ayubia National Park deserve attraction, because their survival is threatened. The provincial government is requested to enact legislation to save the leopard. The black bear and the Monkey’s, fines and Jail terms are suggested for trappers and killers.

A civilized country guarantees security of life and honor of its citizen, preserve its flora, fauna and conserves its birds and animals by proper lows, education and public awareness. In our criminalized society no one is safe anymore. Human beings are routinely gunned down without remorse. Birds especially partridges, bustards and quails and shoot and netted indiscriminately out of reasons. And forest mafias have destroyed forest so recklessly that thick Jungles have been turned into deserts. When the Law and the Order degrades both humans and animals suffer. While thousands of  men, women and children have been gunned down by terrorists and sectarian killers who have yet to be dealt with properly country’s world life i.e both birds and wild animals has been  destroyed with a vengeance. VIP,S hunt and kill precious and endangered leopards, black bears, monkeys , markhors , foxes , Jackals, Chakors , Ramchakors and Partridges with bloody relish. The colorful boards warning peoples not to kill leopards, monkeys, pheasants, chakors and partridges at Ayubia National Park.

No One cares that the endangered leopard, black bears and monkeys are being killed.

The Pakistan society and culture is to be blamed for the contempt in which animals are held. Educating the public to love animals and birds and protect the threatened and near extinct wild life should be the priority of every citizen of Pakistan.Staff of K.P.K forest department entered Ayubia National Park on 20th Sep, 2012 on the directions of the secretary environment Govt of K.P.K and illegally chopped of trees over arching the famous pipe line trail between donga gali and ayubia. These trees had fallen down under heavy snow several years back a made over head bridges on the trail. The trees were not removed by the wild life department because they did not pose any threat to visitors and did not hamper their movement. It was exactly in accordance with the provisions of the K.P.K wild life low which says that no plants whether dead or alive should be removed from a National Park. The fallen trees are a component of park ecology as they provide food to the cavity nesting birds and also add to the soil organic matter as decomposition.

In addition termites and other insects which breed in these fallen trees become a feed for the birds and thus the cycle of biodiversity.

Removal of fallen trees is also a temptation for the timber hungry mafias to destroy the forest in the pretext of wind falls. Ayubia National Park is being managed by the wild life department since 1984 it has been saved for axe and saw of the timber mafia supported by the forest department from almost three decades and now gives a look of a green island surrounded by desolate rock mountain.

The wild life department resisted the order of the secretary environment to cut and remove the trees to the utmost with the consequence that the forest department was order to carry out its traditional and well known function of chopping and removal of wind falls.The trees in the national park are likely to fall in winds and snow in future too. And if the policy of their removal by the forest department continues, the national park will meet the same fate as many other forests have met in the guise of wind falls.

Ayubia National Park is internationally known for its naturalness and pristinely and is the most protected piece of moist temperate conifer forest.Declaration as National Park is the only legal tool to save our valuable forest.However today tyrannical and illegal move by the so called custodians is has rendered even this tool ineffective.The civil society and the comity of nature conservationist condemn this illegal action in the national park. And request the Chief Justice of Peshawar high court to take suo-moto notice of this illegal action and save the Ayubia National Park.

View all posts by Istiaq Ahmad →