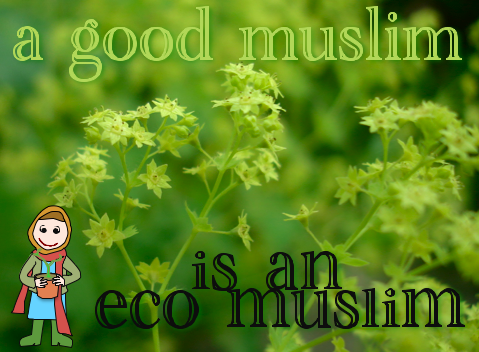 Environmentalism is one concept which is in harmony to every other religion. Every religion which promotes peace and prosperity put an emphatic stress on the protection, conservation and maintenance of the natural environment.Islam is one such religion which has heartfelt affections for environment, biosphere and the entire life surviving on the mother earth.

There is hardly any conflict between any religion nor there any noticeable contradiction of Islam to other religions in compliance to environmental ethics. For instance Quran e Karim has a resemblance to passages in the Bible, and portrays a similar view of creation. “Praise be to Allah who created the heavens and the earth and made light and darkness”.

Islamic teachings put an emphasis on a sustainable use of natural resources and promote the conservation of wild life including animals and plants.

A very famous event we know from the life of the Prophet Muhammad Peace Be Upon Him; He said “If a man is planting a tree and the signs of the doomsday appear, he should still plant the tree”.

Moreover, the act of planting trees is considered amongst the most sacred deeds. This has been called as Sadqa-e-Jariya i.e. once someone has planted a tree, as long as the tree lives, and the God’s creation gets benefitted from it, the Planter of the tree will gain Sawab (rewards and benefit awarded by Allah for good deeds).
Islam is a great proponent of Environmental Ethics. It perches Tawhid (unity), khilafa (trusteeship), and akhirah (accountability, or literally, the hereafter), these three central concepts of Islam, are also the pillars of Islam’s environmental ethic.

According to these principles, Tawhid i.e. Unity rests with Allah Almighty, he is the creator and sustainer of this universe, and we are answerable to Him for use and misuse of His creations including plants and animals, on His earth.

Also Read : What Is Environment?

We have been told straightly in the Book of Islam, the this entire universe is the creation of Allah, and thus He will not forgive the ones who transgress their limits in using the assets which are limited and blessed to mankind for survival , “And the earth We have spread out like a carpet; set thereon mountains firm and immobile; and produced therein all kinds of things in due balance” (Q.15:19).
A man is designated as the Kahlifa of God on earth. Man’s responsibility is that of a trustee, who has been blessed with innumerable natural resources on earth by Allah the merciful, yet, he is responsible to utilize these resources with great care and within prescribed limits. He has no right to exploit the nature for unwanted pleasures. He can only use the natural resources for the benefit of mankind and ensure his survival on earth. The Holy Quran has beautifully quoted the verse, “Do no mischief on the earth after it hath been set in order, but call on him with fear and longing in your hearts: for the Mercy of God is always near to those who do good” (Q.7:56).
The concept of Akhira (doomsday) keeps a human vigilant towards his roles and responsibilities. This concept reminds a human that whatever he does on earth, and all that he use or misuse, he would be accountable for it on the doomsday.
Hence the religion Islam puts a big responsibility on our shoulders to maintain the environment is a balance pragmatically. We are not allowed to disturb the natural processes of nature, and we should conserve our natural resources to keep up the harmony on mother earth. All these teachings and restrictions are for the good of mankind.

Also Check : “Save the Environment”, Are we really doing it?

The unchecked exploitation of the natural environment is already evident through deforestation, extinction of precious biodiversity, loss of soil fertility, climate change, global warming, frequent floods, droughts, wild fires, and melting glaciers. The need of the hour is to revisit the actions which we do unknowingly and damage the beauty of the fragile environment.

This Article is Written by “Anusha Sherazi” Author/Subject Specialist At Envirocivil.com