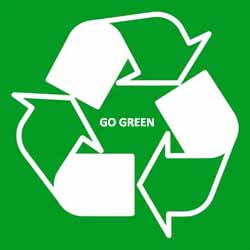 Rapid industrialization and modernization has given mankind great comfort and many inventions have taken place which was beyond the imagination of mankind.  In the blind race of modernisation we have forgot to take care of Environmental issues arising out of using many of the technologies. The impact of excess usage of these resulted in great pressure being exerted on Earth and now we are seeing the results of this exploitation with sudden climatic changes and many natural calamities happening across the globe.  A sudden need has arisen to reconsider the policies of nations towards environmental issues that have been coming out with the excess usage of Non conventional energy sources.

Earth’s temperature is rising continuously due to various heat trapping elements present in the atmosphere and this rise in temperature is known as Global warming. Some of these elements which traps heat energy and do not let sun rays to escape earth surface are Co2, sulphur oxides, nitrogen oxides, chloro fluro carbons. They are harmful for atmosphere and various efforts have been put in to control the emissions. How we know climate is changing due to global warming?

Below listed changes indicate how climatic changes are taking place around us that we often don’t even notice:

These factors indicate that sudden climatic changes are taking place and recent natural calamities are the result of these changes. We need to think deep to prevent these changes. A globally combined action has been required to combat the drastic effects of Global warming. There are many conventions that have taken place started from Earth summit in 1992 and to the most recent in 2012. We have signed various protocols to stop emissions of harmful substances and one of the most important of them is Kyoto protocol which many countries discarded and not signed. Kyoto protocol is all about reducing carbon emissions and accordingly country gains carbon credits and which results in overall commitment and reduction of Green house gases. But various emerging nations refused to accept the terms as that will hinder their Economic development. We need to make a balance between economic policies and environmental policies and the best way to go is Go Green.

Go Green concept is always misunderstood as the revolution that has started in 1970 in agriculture or with planting a lot of trees and all. Go green is simply an effort to move towards cleaner and renewable sources of energy. In the present world we are so much dependent on modern technologies that we can’t imagine life without them, so we need to substitute these conventional sources by Non conventional sources  like wind power, solar power, tidal power etc. This will help in creating a balance in eco system and lifestyle.

There are various ways to Go Green and we can start it at our homes. First of all try to use cleaner source of energy where ever available. Plant as much trees as you can and encourage others to do the same as we know they can act as sinks of Carbon di oxide which is a major green house gas. With the combined and concerned effort of humans we can save the humanity and if we fail to do so we will fail to exist.